What's in a Name?

"Fabergé" - the name connotes high standards of art, quality, and craftsmanship. As a brand, the name has great marketing power.  So much so that the name has been sold many times since the 1917 Russian Revolution effectively ended the original House of Fabergé. 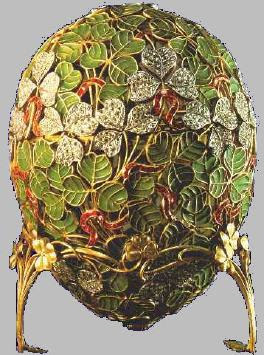 Fabergé was the final appellation of a family traced back to 17th century France, when they were called Favri.  They were Huguenots who fled their home in Picardy in northern France in 1685 to avoid persecution.  As the family moved eastward through Europe, their name changed to Favry, Fabri, Fabrier, and then Faberge with no accent.  By the 1800s, paterfamilias Pierre Favry (later Peter Fabrier)  settled in what is now Estonia, and in 1814 had a son called Gustav.  By 1825 the name changed to Faberge (no accent).


In the 1830 Gustav moved to St. Petersburg in Russia to apprentice with a goldsmith.  He continued his training with another firm that were jewelers to the Tsars.  In 1841 he had become a Master Goldsmith. 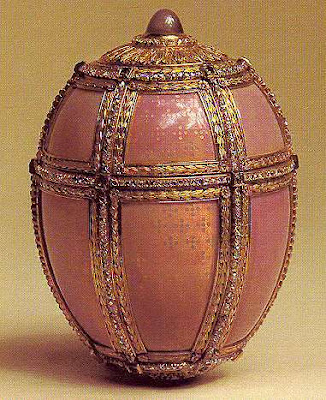 He opened his own retail shop in a fashionable district in St. Petersburg in 1842, and changed the name to Fabergé.  Russian nobility were francophiles and French was the preferred language of culture, which may account for the added accent. Gustav had a son, Peter Carl (known as Carl), in 1846.


Retiring to Dresden, Germany, in 1860, Gustav left his business in the hands of trusted managers while Carl continued his education.  Carl went on a Grand Tour, and learned from goldsmiths in Germany, France, and England, all the while visiting and studying objects in all the major museums.  He returned to St. Petersburg in 1872 at the age of 26.  For ten years he worked under his father's artisans, who taught him further.  In 1881 the business was moved to a larger place and Carl took over.  That same year he was awarded with the Master Goldsmith title.


While repairing and restoring items in the Hermitage Museum, the company was invited to exhibit at a Pan-Russian Exhibition in Moscow.  One of the pieces that they decided to show was a replica of a 4th century BCE Scythian bangle that was in the Hermitage.  Tsar Alexander III was so impressed with it that he gave the firm the coveted title "Goldsmith by special appointment to the Imperial Crown". 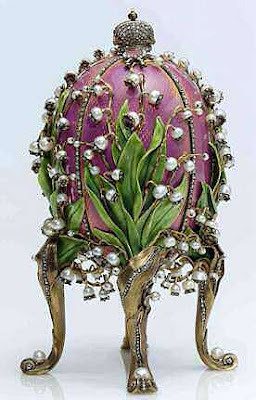 In 1885, Tsar Alexander III commissioned the House of Fabergé to make an egg as an Easter gift for his wife, the Empress Maria Fedorovna.  (See my post on Easter eggs for the importance of this object.)  Carl Fabergé modeled his egg after one in the Royal Danish Collection made of ivory with a ring inside, which he knew the Empress would be familiar with from her childhood as a Danish princess. The Fabergé Hen Egg, made of gold with enamel on the "shell", opens to reveal a gold yolk, which in turn opens to show a gold chicken, and the chicken opened to display a replica of the Imperial Crown with a miniature ruby egg suspended from it. 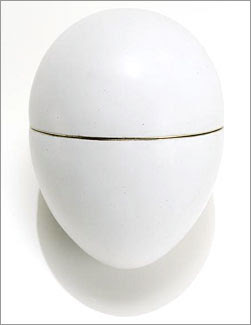 This gift was such a success, that it became a tradition for Carl Fabergé to create an egg each year for Easter for Tsar Alexander III to present to his wife, and for his son Nicholas II to present to his wife and his mother.  Fabergé was given complete freedom in his designs, and only the firm knew what they were before their presentation.  The House of Fabergé created 54 Imperial eggs, of which 42 have survived. Since the Imperial eggs enjoyed such fame, Carl created some for a few select clients:  The Duchess of Marlborough, the Rothschilds, the Nobels, and industrialist Alexander Kelch.


Aside from the eggs, the firm created handstone carvings from semi-precious or hardstones which were embellished with precious jewels and metals.  They also designed exquisite jewelry  and other gift items, which were approved by Carl, and later his eldest son Eugène, to meticulous standards.  The firm won many international awards and was Russia's largest jewelry concern, with branches in Kiev, Moscow, and Odessa. 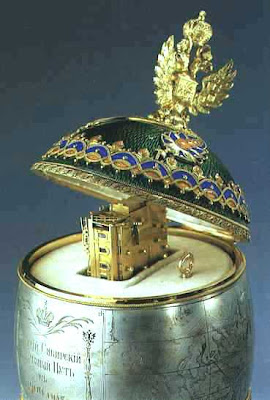 The House of Fabergé was nationalized in 1918 by the Bolsheviks.  Carl fled for his life to Germany, and died two years later in Switzerland.  His sons were imprisoned in St. Petersburg.  One escaped fairly soon, the other some time later. In 1924 they opened Fabergé et Cie in Paris.  They had modest success with their jewelry, and as a sideline repaired original Fabergé items.  Although the company continued until 2001 using the trademark Fabergé, Paris, they lost their rights to the Fabergé name in 1984.


Samuel Rubin, a manufacturer of perfumes and toiletries, paid $25,000 for the name in 1937.  Rubin sold the name for $26 million in 1964, twenty-seven years later.  Subsequently, the brand was sold several times.  Currently it is owned by a group of investors from Pallinghurst Resources LLP, a London-based investment advisory firm.  Pallinghurst established a Fabergé heritage council, and included cousins Sarah and Tanya, two of Carl's great-granddaughters.  The intent is to steer the name back to the elegance of its roots.


So where will the name "Fabergé" go, and what will it mean in the future?  An invented name that has been used of late to signify desirability and elegance in rather banal products will hopefully be revitalized.  In the commercial world, however, I see little hope that it will equal the art and craftsmanship of Carl Fabergé.