You used to see groups of them at airports and along Hollywood Boulevard. Heads shaved, wearing orange robes, they became a cliche in comedy films and tv shows.  Although they are not so prevalent any more, they still elicit a snicker or two when someone mentions them - Hare Krishnas.


What would you do if you were trying to establish a centuries old religious tradition from India in the United States in the 1960s?  Well, having a rock concert just might work - and that's what happened on the West Coast.


A. C. Bhaktivedanta Swami Prabhupada was assigned the mission of spreading Vedic knowledge to the English-speaking world.  He came to the United States in 1965.  He went everywhere to spread Krishna Consciousness.  He befriended many famous spiritual seekers of the time, including George Harrison, John Lennon, Yoko Ono, Allen Ginsberg, Jerry Garcia, and Donovan, to name just a few.


To introduce the Swami to the West Coast, it was decided to sponsor a charity rock concert.  The Avalon ballroom in San Francisco was donated for the night.  Allen Ginsberg was persuaded to fly from New York to personally present him.  Big Brother and the Holding Company (with Janis Joplin), the Grateful Dead, Jefferson Airplane, Quicksilver Messenger Service, and Moby Grape agreed to perform for the musicians' union minimum of $250.


Admission was $2.50 and limited to door sales.  With an audience of nearly 3,000, the room was filled to capacity.  The concert began at 8 P.M., and the Swami arrived at 10:00 P.M.  He lead two hours of chanting, ending with Sanskrit prayers. The musical groups and members of the audience, many of which had brought instruments, joined in.  When the Swami left, Big Brother and the Holding Company took the stage.  The event lasted into the wee hours.


This event attracted the mainstream media's attention, and brought awareness of Krishna Consciousness, as was intended.  The $2,000 in proceeds went to support the Radha Krishna Temple in San Francisco.  Some members of the Hell's Angels acted as security guards.  Timothy Leary attended, as did Paramahamsa Yogananda's disciple, Swami Kriyananda.  Moby Grape were unknown in the music scene, but their participation made their name.


This was an ideal time for the launching of the Krishna Consciousness movement. The counterculture was fascinated by everything Indian, and very interested in spirituality and expanding their minds.  The Radha Krishna temple was in the Haight-Ashbury neighborhood, which soon became the center of hippiedom.


ISKCON - the International Society for Krishna Consciousness - aka the Hare Krishna movement, is based on texts from which the ideas are thought to be about 5,000 years old.  There is an extremely long oral tradition in Sanskrit.  The movement in India is based on the Gaudiya Vaishnava tradition, which emerged as a group in the late 15th century.  It is non-sectarian and monotheistic, and was formed to broadcast the practice of Bhakti yoga, which advocates the fostering of loving devotion to one's personal form of God.  There are three major schools of Bhakti yoga - Vaishnava (forms of Vishnu, of which Krishna is an incarnation), Shaivism (forms of Shiva), and Shaktism (the divine feminine).


Of course, Western practices differ significantly from the Indian ones.  For one thing, in India drugs are a definite no-no, yet the temple created in the Haight specifically catered to those coming down from acid trips or other drugs.  The temple became an integral part of the Haight-Ashbury scene.  People living on the streets always knew where they could get a hot breakfast, and the chanting was a good way to come down off a drug-induced high. 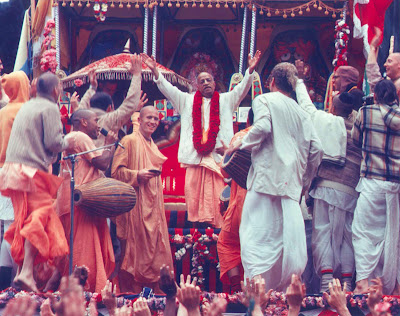 Swami Prabhupada is best known in the West for his translation of the Bhagavad-Gita, which literally means "song of God".  It is a 700 verse Hindu scripture from the epic work the Mahabharata, but is often considered a stand-alone text.  It features the conversation between Krishna and Prince Arjuna prior to a battle.  Prince Arjuna has a moral dilemma about fighting his own family and his duties as a prince and a warrior.  Krishna counsels him on duty and universal harmony.


The Gita, as it is informally known, is a comprehensive look at the Vedic tradition. It is considered an important text in both the fields of philosophy and literature. Luminaries such as Albert Einstein, J. Robert Oppenheimer, Carl Jung, Ralph Waldo Emerson, Herman Hesse, and of course, Mohandas Gandhi have given it high praise.


In Swami Prabupada's lifetime he saw ISKCON grow into a worldwide federation, still extant today.  On August 18, 2007, forty years after the Mantra-Rock Dance was held, at the People's Park in Berkeley a second Mantra-Rock was held.  This free commemorative event was deemed a success, and proof that Swami Prabupada's mission was accomplished.