Margate's Shell Grotto is No Folly(?) 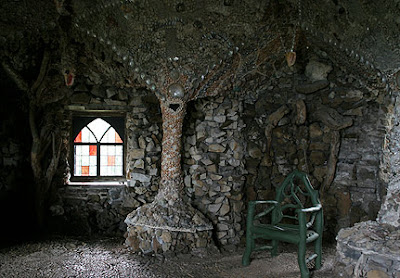 Mr. James Newlove was digging on his property to make a duck pond in Margate, England in 1835.  When a hole appeared, he lowered his young son into it.  His son described tunnels lined with shells.  Turns out there was 70 feet of winding underground passages - all decorated with shell mosaics - that led to an oblong chamber, known as the altar chamber, which is 15 x 20 feet. 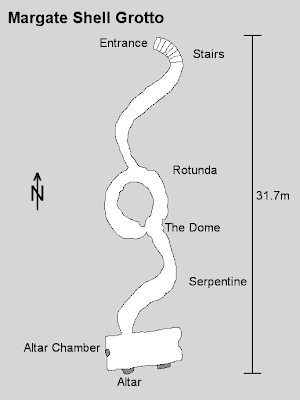 Architecturally speaking, a folly is a building that is constructed for decorative purposes but so extravagant it exceeds its role as an ornament.  Follies were once important features in English gardens in the 18th century, as well as France, Ireland, and even the U.S., to name a few countries.  At first they took the form of Egyptian pyramids, Roman temples, or ruins of Gothic abbeys.  But later they took on more exotic features.  Whether the Shell Grotto is a folly is debatable.


Follies by definition have no purpose other than ornamental.  The Shell Grotto may have functioned as a sun temple.  The sun enters the Dome, which is halfway down the tunnels, just before Spring Equinox, and stops just after the Autumn Equinox.  At midday on the Summer Solstice the sun aligns precisely at midday. This would indicate when the fertile season was in the area.

There are many theories about who made have built it, including that it was constructed by the Knights Templar.  It is impossible to carbon date, because it was initially lit by gas lamps and the soot from them accumulated making any dating attempts invalid.  The shells are local, and the glue is fish-based.  The glue also contained volcanic elements, but many ingredients are unidentified. 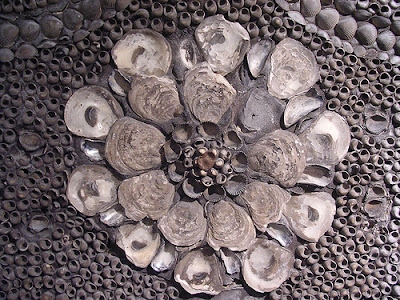 It is listed as a Grade 1 structure, so English Heritage protects its preservation. Because of dampness, English Heritage entered it onto the Buildings at Risk register in the 90s.  It is open to visitors, as it has been since 1837.


Another unusual aspect is while shell structures were popular in 1700s, and there are many of them in England, they are all on the grounds of estates.  This grotto lies under farmland, and the land was never part of an estate.


Since it cannot be successfully dated, theories have it going back any time before the 1800s for about a thousand years.  The designs suggest patterns from Indian and Egyptian folk art - trees of life, phalluses, gods, and goddesses, among other motifs.


Perhaps one day some kind of documentation will be found that will enlighten us about who built it and why.  Or maybe dating techniques will become more sophisticated and will at least point us to the correct time of its origin.  Until then the Margate Shell Grotto will retain its mystery.