"People have no idea of the sources for my work.  I didn't invent anything;
it's all there in the culture; it's not a big mystery.  I just combine my personal
experience with classic cartoon stereotypes."           ~            Robert Crumb
Someone once said if you remember the sixties you didn't live them right.  Even if you did live them right, you probably still remember underground comix, Robert Crumb, and his arguably most popular character, Fritz the Cat.  (My favorite was always Mr. Natural.) 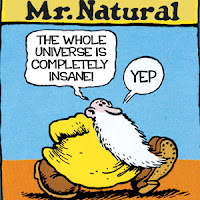 The Crumb boys as kids entertained themselves by drawing.  Robert and his older brother Charles drew their own comic strips.  In 1959 Robert created a homemade comic book called "Cat Life", based on the family cat, named Fred.  In Crumb's 1960 "Robin Hood", Fred morphed into Fritz and became anthropomorphic.  Fritz became a regular character in "Animal Town" strips drawn by Robert and Charles, sometimes with Fuzzy the Bunny, who was Charles' creation.


R. Crumb has claimed that most of the comic books he enjoyed as a boy were funny and based on animals.  He liked working with animals because they were easy to draw and one could get pretty silly with them.  When he was older he was influenced by Walt Kelly's Pogo strip.  He has also stated that TV shows like Howdy Doody and the Lone Ranger deeply imprinted on him.  (Crumb's sexual fetishes are well-known, as is the fact that as a boy he was sexually attracted to Bugs Bunny.) 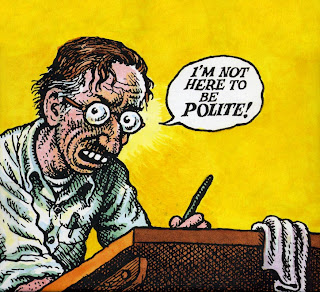 In the mid-60s Crumb drew strips with Fritz the Cat for his own amusement. Later they began to be published in magazines and underground comix.  Fritz became almost an icon for underground comix, and one of the most familiar characters in that whole underground scene.


Fritz is self-centered, amoral, unethical, and hedonistic.  Art critic Thomas Albright described him as "a kind of updated Felix with overtones of Charlie Chaplin, Candide, and Don Quixote."  He was a cool and hip character, cocky and smooth-talking.  Although he has been called Crumb's alter-ego, Crumb himself denies any personal connection, saying Fritz was just fun to draw.


The strip was set in a "modern 'supercity' of millions of animals".  At first the stories were simple, but they became more and more complex as the characters reacted to contemporary situations.  Fritz had some pretty crazy adventures, and lots and lots of sex.  He was in different strips a beatnik, a pop music star, a hippie poet, college dropout, a CIA agent, and a terrorist and revolutionary. 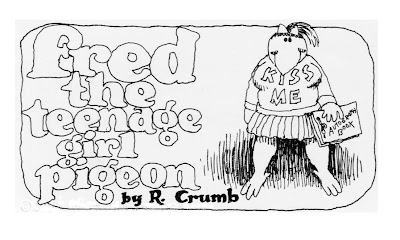 As Fritz gained popularity, he came to the attention of animator Ralph Bakshi and producer Steve Krantz.  They wanted to make an animated film, but Crumb was not enthusiastic about the project.  Unable to reach an agreement with Crumb, Krantz went to Crumb's ex-wife, Dana, who had power of attorney.  Crumb received $50,000 and ten percent of Krantz's proceeds.


Fritz the Cat was the first animated feature film to receive an "X" rating from the Motion Picture Association of America.  The distributors cashed in on this - "X-rated and animated" angle, and it became a worldwide hit. The 1972 film became the most successful independent animated feature film of all time.  It is listed #51 on the most recent list of top 100 animated films by the Online Film Critics Society, and has appeared on Britain's Channel 4 list of greatest cartoons.  (A sequel was made, The Nine Lives of Fritz the Cat, by Krantz without Bakshi or Crumb.  It is, however, considered inferior to the first film.)


Crumb disliked the film so much, he attempted to have his name taken off the film's credits.  The bad feelings poisoned any potential relationship between Crumb and Bakshi.  Crumb disliked the voice used for Fritz, what was (he felt) condemnation for the left, and that the dialogue was not consistent with the character, but instead "red-neck and fascist". 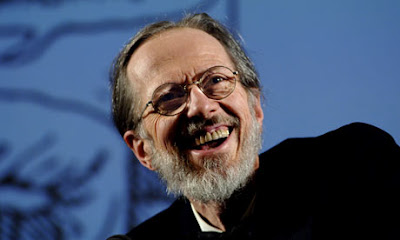 In fact, Crumb was so incensed by the film, that he later drew a strip where Fritz was killed off: 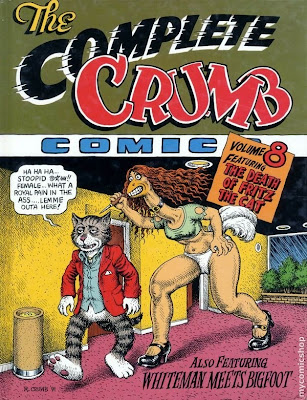 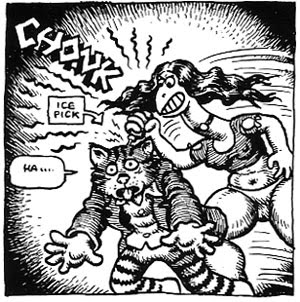 Fritz did effectively die with that strip, and from what Crumb has said in interviews since, he will remain so.  Art critics and historians still ponder the popularity of that strip, and in fact the popularity of Crumb, himself, who has outlasted most of his fellow comix creators.  The original comix books and other paraphernalia bring big bucks, and collectors still avidly strive to find them.  If people find Crumb weird and sick for creating it all, what does that say about the people who made him popular and keep his work alive?