Repost: The Making of "Merry"

“If I could work my will…every idiot who goes about with ‘Merry Christmas’ on his lips should be boiled in his own pudding.”
Ebenezer Scrooge 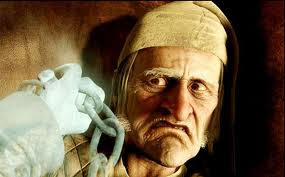 In 1843 Charles Dickens published A Christmas Carol, and it was around this time that the Christmas traditions that are known and cherished began.  Up until that time people would wish one another “Happy Christmas”, a greeting that Queen Elizabeth seems to prefer today.  But with the publication of Dickens’ book, the word merry began to take up a new meaning of “joyful, jolly, cheerful, and gay” ("gay" has changed in meaning itself), and in some cases intoxicated.  It still had a bit of a bawdy reputation.  All the new Christmas traditions and the use of this word in the instantly popular Dickens cemented the change of meaning for merry. 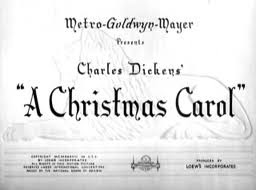 Prior to Victorian times, the word had less stellar implications.  In Middle English it had wider meaning:  “pleasant-sounding”; “pleasant-tasting”; “fine” weather; “handsome” dress.  In the 14th century, a merry-man was the companion or follower of a knight or outlaw.  (Remember Robin Hood and his Merry Men?)  A merry-bout was slang for an occasion of sexual intercourse circa 1780, or a drinking session (presumably and hopefully ending in intercourse).  Merry-begot meant illegitimate or a bastard in 1785. 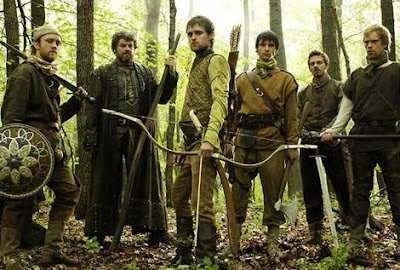 There have been many phrases using merry since the 1300s, when one would make merry (and it still means partying!)  Merry England, which meant more along the lines of prosperous in 1400, is now commonly used mockingly.  The merry month of May in the 1560s meant pleasant.
Dinah Maria Mulock Craik (1826-1887) was a British poet who wrote a very popular Christmas carol still sung today:
God rest you merry, gentlemen,
Let nothing you dismay,
For Jesus Christ, our Saviour,
Was born upon this day,
To save us all from Satan's power
When we were gone astray.
O tidings of comfort and joy!
For Jesus Christ, our Saviour,
Was born on Christmas Day.
It is important to note the punctuation in this song.  Merry is not an adjective describing gentlemen.  Rather it is wishing for God to allow the gentlemen to be content, as in “rest easy” or “rest assured”.  This is further stressed by the next line, "Let nothing you dismay." 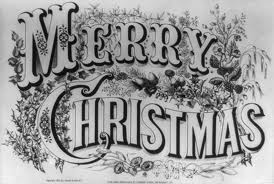 A New Type(writer) of Art 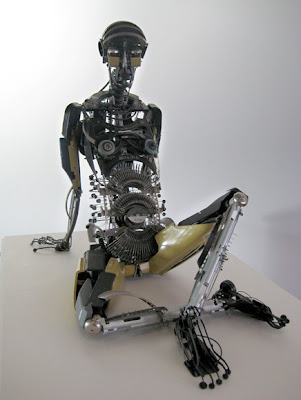 I know people who prefer typewriters to computers.  There is something satisfying about clicking away on a manual machine, although I'm glad to not have the need for white-out any more.  But Jeremy Mayer is into typewriters in an unusual way - he makes art with them. 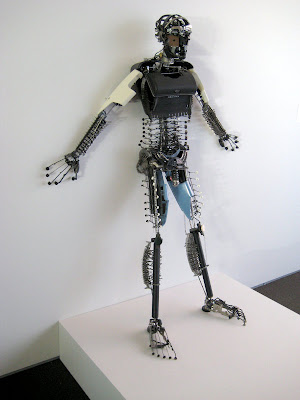 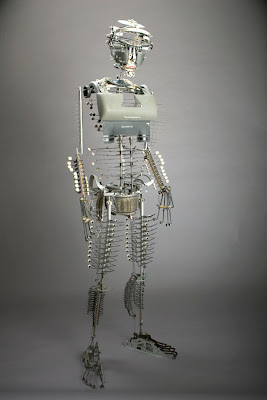 Mayer disassembles typewriters and uses the parts to make life-size human figures and other creatures.  The human figures are anatomically correct.  Before using the pieces he categorizes them according to what anatomical parts they remind him of. 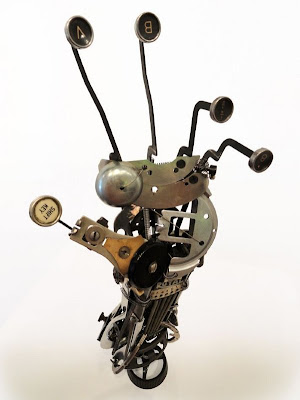 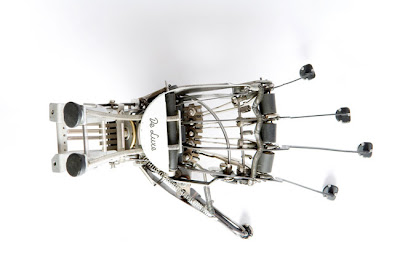 He sketches his ideas digitally using Photoshop or a CAD or 3D program. Sometimes he uses live models.  For human figures he starts with the spine and pelvis to insure that the weight of the piece will be supported, just like a live human. 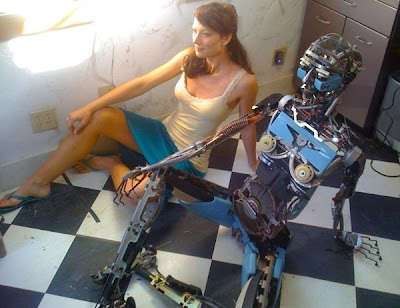 He does not use glue, nor does he solder or weld the parts.  Instead he uses screws, pins, nuts and bolts, and other common devices.  No parts that did not come from a typewriter are used.  It takes him between 400 and 1,400 hours to build a full-size human figure, and about 40 typewriters. 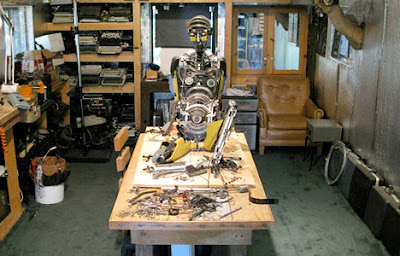 Mayer describes his work as a cross between Da Vinci's drawings and the futuristic ideas of sci-fi writers like Philip K. Dick or William Gibson.  He seems to lean towards steampunk, as well, although that is apparently not his intention. 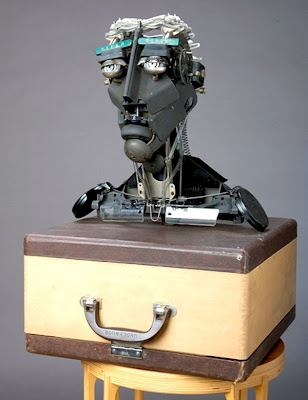 Whatever his influences, his work is an interesting blend of science/technology and nature.  His interests include molecular engineering and biotechnology.  Of course, sci-fi is not only an interest but has inspired him since he was child intrigued by his mother's manual typewriter. 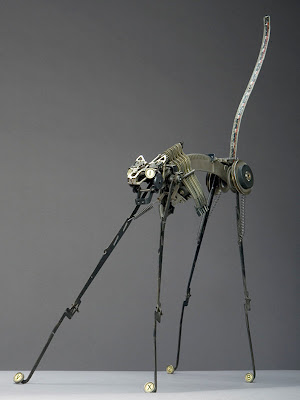 Recycling and repurposing was also his intent and when he started using typewriters he thought they were becoming obsolete artifacts.  His feelings have changed somewhat as typewriters made a sort of comeback, even though its been for their historical value rather than use. 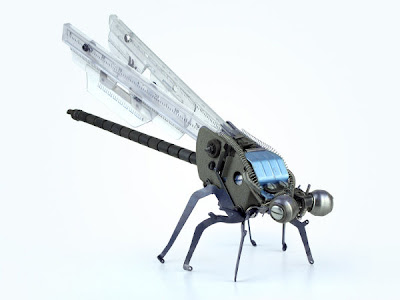 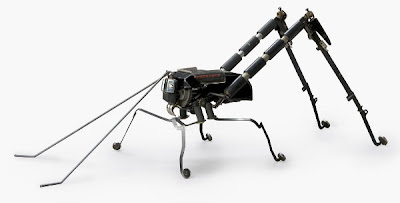 He strives to make all his sculptures anatomically correct.  To make the penguin sculpture, he went to the Monterey Bay Aquarium to study them.  He will alter his sculptures minimally by bending, drilling, and cutting, but not so these adjustments are visible. 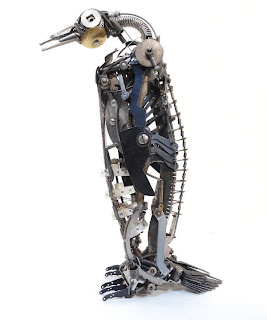 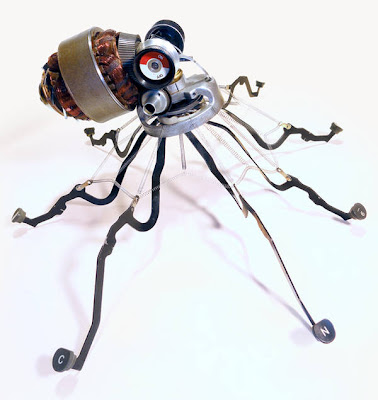 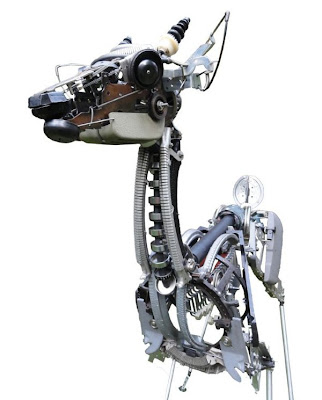 The California Bay Area resident finds inspiration in meditating and letting the parts he has accumulated come together in his head.  He seems to have given wide berth to his imagination since he was a boy, and the sculptures he makes are the fruits of that mental wandering. 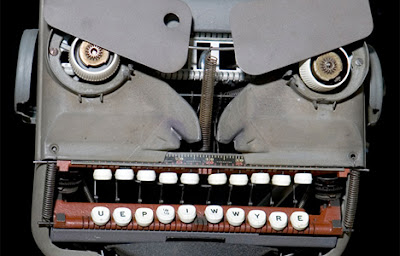 Since he's proven a tendency to follow his mind and imagination, I expect more good things to come from his creativity.  As he grows and learns more, his art should grow in interesting ways.  An artist to keep an eye on, for sure.

The Food We Love to Hate...and Toss

There is an urban legend that there is only one fruitcake in the world, but it has been passed around (re-gifted) so many times people think there are multiple.  I once sent out holiday cards that had a recipe for fruitcake on the cover, the ingredients of which included a 100-lb bag of cement, rebar, and a keg of nails.  If I remember correctly, there were pieces of broken glass to stand in for the candied fruits.


Fruitcake is the dessert people love to hate.  A tradition for the winter holidays, it can be found in fine gift shops and catalogs or at your local dollar store. Depending on what type you like, and where you buy it (or what recipe you use to make your own), it can be delicious or it can live up to its loathsome reputation.


Fruitcakes were placed in tombs in ancient Egypt.  They were also carried by Roman soldiers on the march.  Crusaders packed them to take on their way to find the Holy Grail.  All these facts attest to their durability, and their reputation for longevity, since ancient times.  This durability is what has earned their reputation as doorstops.


There are basically two types of fruitcake.  The "light" fruitcake is made with light-colored ingredients such as granulated sugar, light corn syrup, pineapples, apricots, and golden raisins.  "Dark" fruitcake is made with darker ingredients such as molasses, brown sugar, dates, dark raisins, and prunes.  They can contain candied fruits or dried fruits, nuts, spices, and often some kind of liquor.  There is a high ratio of fruit and nuts to batter, the batter usually being just enough to hold everything together.

The earliest recipe is from ancient Rome, and lists pomegranate seeds, pine nuts, and raisins mixed into a barley mash.  Preserved fruits, honey, and spices were added in the Middle Ages.  When it was discovered that sugar could preserve fruits in high concentrations, candied fruits became popular.  This also made fruitcakes more affordable.  Fruits would be soaked in progressively greater concentrations of sugar.  This made both the flavors and colors intensified.  The inclusion of nuts caught on in areas where they were grown.  In the 18th century fruitcakes, which had by now included some sort of liquor, were outlawed because of it in Europe, but the law was soon repealed because fruitcake had become a standard teatime fare.


What turns most people off is the candied fruits.  Candied citron is made from the peel of that fruit.  Pineapple, cherries, and citrus rind is made by dipping or boiling pieces in heavy syrup and then drying them.  Often they are then rolled in granulated sugar.  The bright green cherries are also a turn-off - the color is unnatural and unappealing.  (I personally have never seen fruitcake on a menu, except as one of the multiple offerings at tea.)


The average weight of a fruitcakes is two pounds.  Because of the high density of sugar, mold doesn't develop which accounts for much of its longevity.  The alcohol helps.  Aging is an important element, most bakers agreeing that it should be made at least one month before eating.  Kept in an air-tight tin, and moistened with small amounts of alcohol every few months, fruitcakes are said to last three years.  This allows the flavors to meld.  Since fruits contain tannins, the aging process is similar to wine.  When ready to consume, the fruitcake should be heavy but moist.  In 2003, Jay Leno made fruitcake history by agreeing to taste test a 125-year-old fruitcake brought to the show by Morgan Ford.  The fruitcake was his great-grandmother's, and had been handed down through the generations. Apparently it wasn't lethal.


In Manitou Springs, Colorado, there is an annual Great Fruitcake Toss.  It is held the first Saturday in January.  If you don't have a fruitcake, you can "rent" one for a dollar.  Admission is one non-perishable food item.  Fruitcakes can be hurled, tossed, or launched by a non-fuel device.  There are two weight divisions - two pound and four pound.  Fruitcakes must contain glacéed fruits, nuts, flour, and be edible.


In the past there has been four categories.  Catch the fruitcake is done by teams. Accuracy at hitting targets placed at 75, 125, and 175 feet is another category. The crowd judges the most creative launch, and finally the showmanship/peoples' choice award is judged by costume, slogans, and decorated devices.  The 2012 event will take place on January 14th, from 9:00 A.M. until 2:00 P.M. at the Manitou Springs High School track. 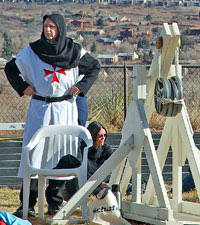 Westerners are not alone in the getting-cakes-we-don't-particularly-want category. Asians have mooncakes - thin and tender crusts with a sweet and dense filling, sometimes with whole salted egg yolks inside to symbolize the full moon.  The fillings range from lotus seed paste to sweet bean paste to five kernel (5 types of nuts and seeds mixed with a syrup), depending on the region.  They are very, very sweet, and traditionally not very healthy.  They began in China, but are now found in Japan, Thailand, Vietnam, Indonesia, and the Philippines.  They are traditionally eaten during the Mid-Autumn festival, an important Chinese festival dedicated to lunar worship and moon watching.


This year, if and when you receive a fruitcake gift, think of its glorious history.
You can also wonder if the ancients held fruitcake tosses, and if they re-gifted it among themselves as well.  Perhaps the one you receive has an illustrious pedigree.