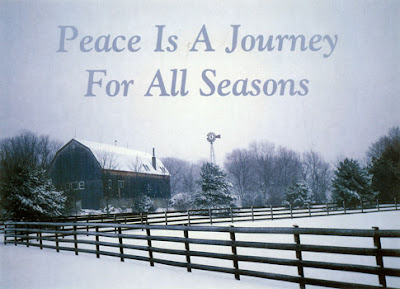 I don't celebrate religious holidays, but I respect them and the people who do.

What I do celebrate is the concept of peace on earth.  To everyone, regardless of who they are, and to everything - animal, vegetable, and mineral.

Tonight and tomorrow, as my husband and I walk around the land we are custodians of, filling bird feeders, scattering seeds, filling water bowls, and laying out treats for the bunnies, squirrels, and whoever else comes along, we will be sending them the greetings of the season.  I will hug my favorite trees, and sit on a boulder and take it all in.

Whatever you are doing, I wish you peace and happiness.  And the best greetings of the season.

Email ThisBlogThis!Share to TwitterShare to FacebookShare to Pinterest
Links to this post
Labels: peace, peace is a journey for all seasons, peace on earth, season's greetings

WAY before her time! 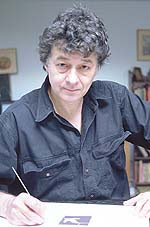 Not many people this side of the pond have heard of Tony Meeuwissen, which is a pity.  One of those artists who never had formal training, his natural skills and abilities have served him well. 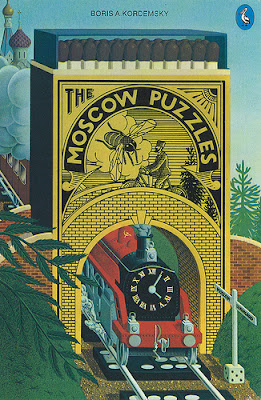 Instead of art school he served a five-year apprenticeship with a Rank Screen Services in London making commercials, then worked for various advertising agencies and design groups as a designer and art director before beginning his  freelancing career. 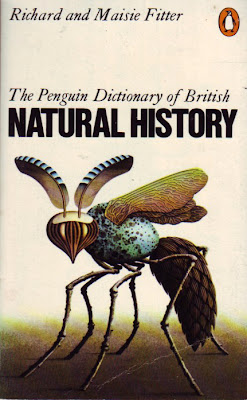 He has done various projects, from a Rolling Stones album cover, books (including his own), stamps, and the awesome The Key to the Kingdom transformation cards.  His covers for Penguin books are phenomenal, and one needs to remember that these were all done before the advent of computer illustration. 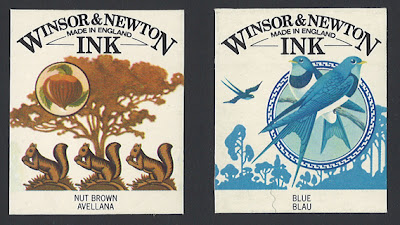 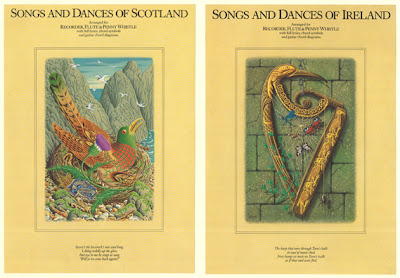 He has also won two gold and two silver awards from The Designers and Art Directors Association (D&AD).  His Royal Mail stamps were voted the most popular British stamps.  In 1984 he won the Italian Francobollo d'Oro award for the world's most beautiful stamp. 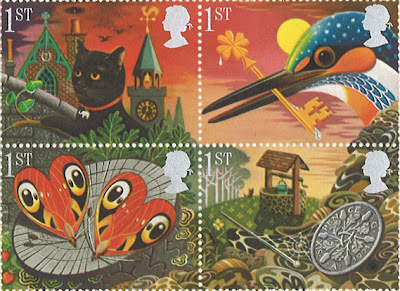 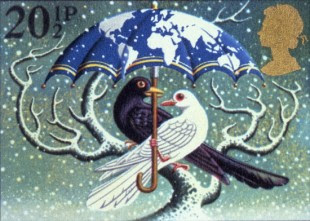 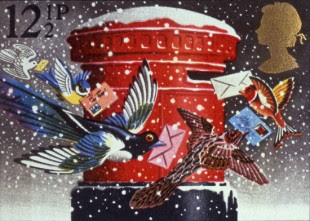 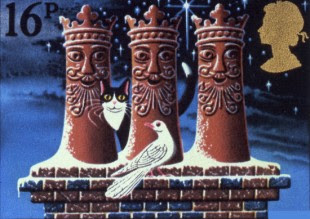 But I think his most spectacular work are his playing cards.  Published by Pavilion Books in September 1992, the deck came with a book of corresponding verses.  There was a treasure hunt in this, and the winner won a golden key and $10,000.  The object of the hunt was to take an 18-line verse and decode it to select 14 cards.  Once the cards were selected and a familiar phrase found, the winner had to construct a verse applicable to the clues, including the names hearts, diamonds, club, and spades.  However, to my mind, the real treasure is the deck itself! 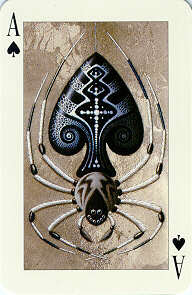 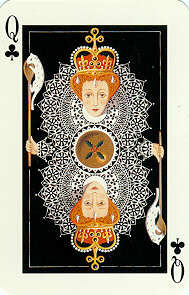 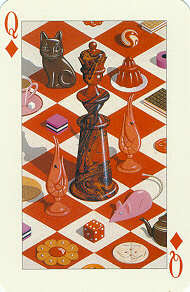 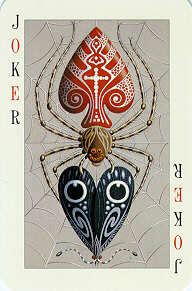 The Art of the Fold

Origami is the art of paper folding (from the Japanese ori meaning "folding" and kami meaning "paper").  The term refers to all types of paper folding, even those not of Japanese origin.  In Japan origami is a folk art that goes back to the 17th century CE, and perhaps even earlier, but which became really popular in the mid-1900s.  However, there are paper folding traditions in China and Europe, notably Spain and Germany.  But since paper is so perishable, the only way of tracing its history is through references in published texts.


In the early 1900s, origami artists began creating and recording original pieces.  Akira Yoshizawa created innovations such as wet-folding and a diagramming system, which created a renaissance for origami.  In the 1980s, a system-wide study of the mathematical properties of origami were explored, which led to a complexity of pieces which has gone on for decades.


The number of folds can be small, but combined in a variety of ways they can make intricate designs.  Most designs begin with a square sheet of paper whose sides may be different colors or prints.  Traditional Japanese origami doesn't have strict rules, and sometimes cuts are made.  Modular origami, or unit folding, is a form that uses several sheets of paper for one design.  Each sheet of paper is folded into a module or unit, then assembled by inserting flaps into pockets, both accounted for in the design.  The tension created by the flaps and pockets holds the design together. 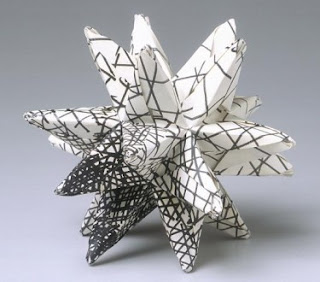 Kusudama (literally "medicine ball") is a form created by sewing multiple pyramidal units together through their points to create a spherical shape.  Sometimes a tassel is added, and they were once used for potpourri.  This can be similar to modular origami, but uses thread, glue, or tape to hold the piece together.


Sometimes paper money is used, also known jokingly as "moneygami".  This is thought to have originated with Chinese refugees detained in America.  It is also known by the name Golden Venture folding, named after the ship they came over on. 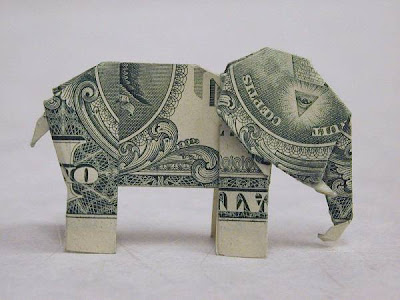 Origami presents several subjects of mathematical interest.  Technical origami, also known as origami sekkei, has developed on a parallel with mathematical origami.  In this field the basic structure of a design can be plotted out on paper or a computer before its execution.  This allows for the creation of extremely complex designs.


The main starting point for these pre-conceived designs is the crease pattern, or CP, which is the layout of creases necessary for the final model.  This is different than a diagram, but is increasingly used instead of a diagram.  There is a challenge in "cracking" the pattern.  Some designers don't publish a diagram, so one is left with only the CP to complete the design.


Some designers want to sequence the steps of their models but are unable to design clear diagrams, either due to lack of diagramming programs or artistic ability.  They occasionally use a Sequenced Crease Pattern (SCP) or Progressive Crease Patterns (PCP), which are names for a set of crease patterns.  This allows them to offer a step-by-step explanation.


One of the foremost origami artists in the world is American physicist Dr. Robert J. Lang.  He is known for his intricate designs.  He has been involved in the mathematics of origami and in the use of computers to apply the theories of origami for real-world engineering applications.  Nine years ago he left the engineering field to become a full-time origami artist and consultant.  Yet he keeps his involvement in physics current with part-time laser consulting and as an editor of the Journal of Quantum Electronics.


I, myself, have trouble remembering how to make an origami crane, so my hat's off to these brainiacs who can do so much more.

Once You Are Real... 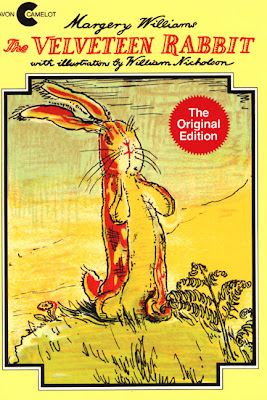 Children’s book can be very charming, and some offer little lessons in life.  The Velveteen Rabbit or How Toys Become Real is one of those.  Published in 1922, it became an instant classic.  I came upon it during my troubled teens, and fell in love with its message of being real, rather than worrying about how to please other people. 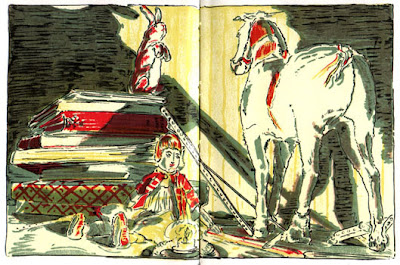 "What is REAL?" asked the Rabbit one day, when they were lying side by side near the nursery fender, before Nana came to tidy the room. "Does it mean having things that buzz inside you and a stick-out handle?"
"Real isn't how you are made," said the Skin Horse. "It's a thing that happens to you. When a child loves you for a long, long time, not just to play with, but REALLY loves you, then you become Real."
"Does it hurt?" asked the Rabbit.
"Sometimes," said the Skin Horse, for he was always truthful. "When you are Real you don't mind being hurt."
"Does it happen all at once, like being wound up," he asked, "or bit by bit?"
"It doesn't happen all at once," said the Skin Horse. "You become. It takes a long time. That's why it doesn't happen often to people who break easily, or have sharp edges, or who have to be carefully kept. Generally, by the time you are Real, most of your hair has been loved off, and your eyes drop out and you get loose in the joints and very shabby. But these things don't matter at all, because once you are Real you can't be ugly, except to people who don't understand."
What a great message.  It becomes even truer when you get older, and your hair has been loved off, and your eyes get weaker, and your joints ache, and you start to look shabby.  Because if you do become real, and it is a painful process, then there are people who love you for whom you are. 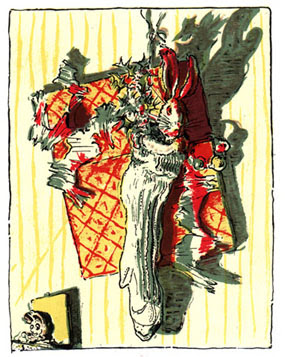 The story is about a stuffed rabbit that is given to a young boy one Christmas.  He is relegated to the nursery, where he is forgotten.  The other toys put on airs and say they are real.  The rabbit's only friend is the skin horse.  Eventually, the rabbit is thrust upon the boy, who comes to love him completely.  Then one day the boy gets very sick, and all the toys he has been playing with have to be burned.  As the rabbit is waiting for the bonfire, a fairy comes and turns him into a real rabbit, since he was so loved. 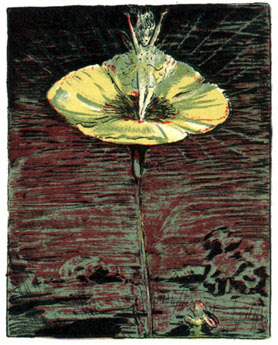 The author Margery Williams (Bianco) (1881-1944) was born in London.  Her father was a barrister, and her mother a classical scholar.  She was encouraged to read and use her imagination as a child by her father.  That desire to read became a desire to write.  Her beloved father died when she was seven, and the sadness of that loss is an undertone to her work.  Sadness and loss are necessary for the continual processes of change and growth.
She went on to write numerous other children’s books.  Most notable is Poor Cecco:  The Wonderful Story of a Wonderful Wooden Dog Who Was the Jolliest Toy in the House Until He Went Out to Explore the World.  Named for her son, Cecco (and arguably the precursor of Toy Story), it is the tale of a wooden dog and his friend, the stuffed puppy, who are on a quest for a lost friend.  Published in 1925, and illustrated by Arthur Rackham, it remains unfairly obscure but is highly collectible by Rackham enthusiasts.
The original edition of The Velveteen Rabbit was illustrated by Sir William Prior Nicholson (1872-1949), an author in his own right of children’s books, as well as an illustrator and painter.  It has been adapted for the theater, as well as radio, television, and movies.
I recommend this book as a gift to everyone, especially children and teens, and dedicate this post to all of us who are continually searching for ourselves and are on the quest to be “real”.
***********
Except as noted, images courtesy of A Celebration of Women Writers
(Complete text included at this site.)
*******************************
Posted by Linda Hedrick at 12:10 AM 0 comments