In English, that is equivalent to "Happy New Year!"
Today is the first day of the Chinese New Year (the Year of the Rabbit), also known as the Spring Festival.  It begins on the first day of the first month of the Chinese traditional calendar, and ends on the fifteenth day with the Lantern Festival.  It is the longest and most important celebration in the Chinese calendar, and one that is centuries old.  The dates are consistent when determined by the Chinese calendar, which is lunisolar - a calendar whose date indicates the time of the solar year and the moon phase.  In the Gregorian calendar the event falls on different dates each year, between January 21 and February 20.
It's silly to try and assign customs and traditions to an ethnic or cultural group and think that they apply to everyone in it.  In any group there will be a wide variance by region.  This is no less true with Chinese New Year.  There are some commonalities, however, that can be found all over China and the Chinese communities all over the world.
One of the legends regarding the beginning of Chinese New Year is that it began with a mythical beast called the Nian.  It would come on the first day of the new year and devour everything; it especially liked children.  People began to put food out in front of their doors, hoping the Nian would eat it and leave.  One day the Nian saw a child wearing red and it ran off, so the villagers learned that it was afraid of the color red.  So now every new year red lanterns, red scrolls, and red coverings on windows and doors are hung.  Firecrackers are also used to scare the Nian away.  The Nian was eventually captured by a Taoist monk who used it as a vehicle.
Red is the predominant color and is associated with virtue, truth, and sincerity. The word for red in Chinese is also the word for prosperous, making red an auspicious color with an auspicious sound.  Fireworks, invented by the Chinese, are an old custom.  They are banned for private use in many areas though, because of the injuries that have occurred.  Municipalities often put on a public fireworks show.
On the day before the celebration starts, people thoroughly clean their homes.  Bad luck is swept out to make room for good luck.  Doors and windows are sometimes given a fresh coat of red paint.  Family altars are cleaned, and the decorations put up the year before are burned and new ones added.  Banners are hung stating "happiness", "wealth", "longevity" and other positive affirmations.  In addition, people buy new clothing, shoes, and get haircuts in order to make a new start.  The day before is also a big cooking day.  Food is prepared for a big family dinner that night, and the food for the following day is prepared, as it is bad luck to make fires or use knives on the first day.
During the two weeks of the festival the emphasis is on family and honoring the gods and the ancestors.  Every day has its prescribed activities.  A lion dance troop may be invited to scare bad spirits.  It is traditional to give gifts, usually food or sweets, to friends or relatives of different households.  Oranges, cakes, biscuits, or chocolate would be a typical gift.  Married members of the family give out red envelopes containing money to kids and teens.  The amounts can range from a couple dollars to hundreds, but are always even numbers (uneven amounts are given at funerals).  Odd and even numbers are determined by the first number, hence 10, 30, or 50 would be odd numbers.  Bosses give bonuses in red envelopes to their employees.
Near the end of the celebration, on the thirteenth day, people eat vegetarian food to clean out their systems from eating too much rich food the past two weeks.  On this day, organizations and businesses honor the Chinese god of war, General Guan Yu.  Because he won so many battles, he is considered a symbol of wealth and success.  On the fifteenth day, the Lantern Festival signals the end of the festivities; families walk the streets carrying lit lanterns to guide wayward spirits home. 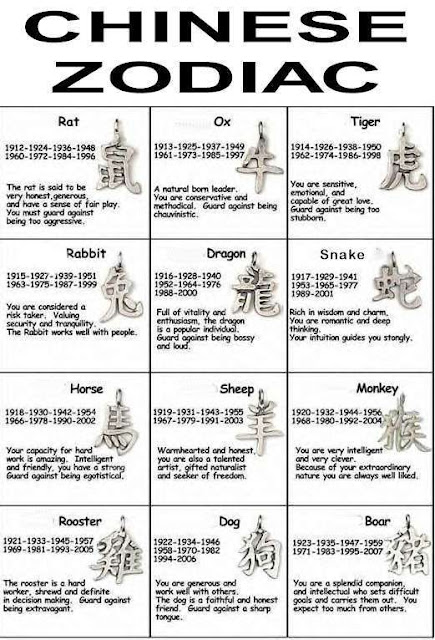 This chart shows the twelve animals of the Chinese calendar.  Although they represent individuals born during their respective cycles, they are not the same as astrological signs.  Chinese astrology, like Western, is complex.  Western astrology uses one's sun sign as only part of a person's character - the moon sign, rising sign, and positions of houses are also some of the things considered when casting someone's horoscope.  Likewise, Chinese astrology - which does not calculate the positions of the sun, moon and planets - uses the five elements (metal, wood, water, earth, and fire), inner animals and secret animals, Yin and Yang, and other considerations.

Today begins the Year of the Rabbit.  May your new year be prosperous!