Five millennia or so ago, a goddess with the body of a woman and the head of a lion, called Mafdet, was worshipped in Egypt.  She was the goddess of both justice and execution, an interesting connection.  Her image evolved to the head of a house cat, and finally the entire image was a domestic shorthair cat.  Her worship was enthusiastic and extravagant, by all reports.  She was called Bast, or sometimes Bastet (Bubastis in Greek), and she had her own sacred city – Per-Bast - in the Nile Delta.  According to Herodotus, thousands attended her annual spring celebration there, and more wine was consumed during this festival than any other at the time – a sure sign of some serious partying, then as now.
In time she became more benign.  She was a protector, not only of Pharaoh, but also pregnant women, and represented fertility.  Like the housecat she was identified with, she took care of her charges with devotion and fierceness.  This loyalty was returned.  When a family’s cat died, they shaved their eyebrows and would take the cat to be mummified and buried.  Archaeologists have found a huge cat cemetery in the ruins of Per-Bast (now Tell-Basta), and other areas as well.  In fact, so many cats were mummified that nineteenth century ships departing Egypt used them as ballast.  Killing a cat, even accidentally, brought about the death penalty in ancient Egypt.
Today, cats still enjoy a special place in the hearts and homes of many people.  What this perennial fascination with cat is about is anybody’s guess.  But one intriguing thing about them is that they purr. 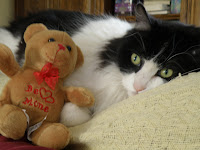 No one knows why they purr, and several theories exist.  With a frequency of somewhere between 75 and 150 hertz, a cat's purr seems to vacillate between the pharynx and diaphragm.  It continues while the cat breathes in and out.  We like to think the purr is about us, and our cats' pleasure at being with us, being stroked and paid attention to.  But cats purr at other times, such as when they are tending their kittens, when they are stressed (both physically and psychologically), and even when they are dying.
Some scientists suggest that the vibrations of purring are used to communicate and perhaps for self-healing.  It is thought that the vibrations can relieve pain, provide faster healing to injuries, and most importantly increase bone density.  One of the comparisons that scientists make is that dogs, their counterparts, are unable to heal as fast, and they suffer from more muscle and bone diseases than cats.  Vets and scientists have done studies on the "high-rise syndrome", using documented cases of cats falling from high-rise apartments.  Out of 132 cases of cats falling an average of 5.5 stories, 90% of these cats survived.  The record is surviving from a fall of 45 stories, but most cats who fall even 7 stories or more survive.  There is an old adage from veterinary schools:  "If you put a cat and a bunch of broken bones in the same room, the bones will heal." 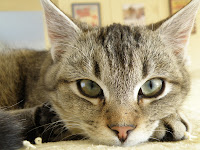 This bone density issue causes much interest as it holds potential implications for humans and other species.  Women, who have more osteoporosis and bone density issues than men, are encouraged to walk and exercise to improve their bones.  Cats, who have great bone density, sleep more hours than they are awake, and exercise doesn’t seem to be on their agenda.
Working on the theory that purring takes the place of physical exercise, researchers have tried putting chickens on a vibrating plate twenty minutes a day at between 20-50 hertz, and the chickens’ bones were strengthened.  When rabbits were subjected to a similar experiment, they not only got stronger but their fractures healed faster.  Continuing studies show that mechanical vibration aids the healing of tendons and muscles as well as bringing pain relief.  It has been used in sports medicine, and some gyms use it to increase muscle mass.  People with COPD have been helped by this therapy as well.  Purring also seems to alleviate dyspnoea, or breathing difficulties, in cats and potentially in people.
Perhaps the ancient Egyptians were privy to this information, another one of their medical mysteries but this one unknown.  As someone who has been owned by many a cat, and gladly so, I can understand the  fascination with these creatures.  And a vibrating plate sounds so much better than a stair stepper.
*******************************
Posted by Linda Hedrick at 12:01 AM 1 comments

Repost: I Was a Gypsy Cult Follower 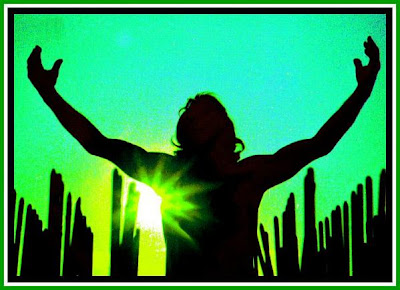 "Some people, when they think of Southern California, think of nuts.
Not the kind that grow in trees, but the kind that swing in trees—the
bearded, mop-haired, half-naked vegetarians who wander around
in the hills and occasionally roll into town like a pack of wild men.
It was quite a few years ago when I lived like this."  ~  Gypsy Boots
When I was sixteen I became a vegetarian.  I used to go to my local health food store - they weren't mainstream at that time - every weekend.  I often ran into this strange and delightful man in the parking lot, giving away organic citrus fruit and extolling the virtues of organic foods and vegetarianism.  He was preaching to the choir, but I liked talking to him.  It was hard to find organic produce then, unless you grew it yourself, and it was very expensive.  So I enjoyed getting the citrus fruits and his special bars.  He was a walking advertisement for a healthy lifestyle and the main reason I liked to talk to him, aside from the subject matter, was that he spoke to me like an adult and never, ever leered.  Something a braless, hippie-wannabe girl often encountered.  I knew who he was because I had seen him so often on The Steve Allen Show.  He was Gypsy Boots.
Born Robert Bootzin in 1914, and also known as Boots Bootzin, he was an original.  He extolled a natural lifestyle eating healthy foods, exercising, and being positive.  He never ate meat, drank alcohol, or smoked tobacco.  He is credited for founding a natural lifestyle that included vegetarianism, yoga,  and "health food". He even coined the word "smoothie" on The Steve Allen Show, as he offered his fruit health drink.  Long before there were hippies, he was the prototype.
He was born in San Francisco and raised vegetarian.  His Russian-Jewish family hiked, did Russian folk dancing, and fed the homeless on their homemade black bread.  By 1933 he had dropped out of high school and wandered with others of "his kind".  In the 40s he lived with his "tribesmen" near Palm Springs, where they lived off the land and under the stars, sleeping in caves and trees and bathing under waterfalls.  They picked fruit seasonally, and called themselves the "Nature Boys".  Boots is said to be the inspiration for a song that fellow tribesman eden ahbez wrote (he preferred lower case letters).  This song made it big time when it was recorded by Nat King Cole in 1948, and has been recorded by many artists since then.
In 1958, he married and settled down in Hollywood, where he raised three kids. His health food store "Health Hut" was the first of its kind and Hollywood celebrities patronized it - think Gloria Swanson, Kirk Douglas.  Besides smoothies, he also concocted an all-natural, sugar-free "Boots Bar" with spirulina, wheat grass, kyolic garlic and Medjool dates.
He might have remained a local legend but for television.  In 1955 he was on You Bet Your Life.  Groucho stated that he admired his rugged individualism.  He made appearances with Spike Jones and his musical comedy group.  He was also on George Putnam's Talk Back show.  But he really became nationally known thanks to The Steve Allen Show.  He appeared on it 25 times in the 60s. 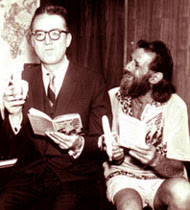 In 1968 he cut his own album - Unpredictable - on Sidewalk Records (a sub label of Tower Records and distributed by Capitol).  He also wrote a couple of books - Barefeet and Good Things to Eat and The Gypsy in Me.  Being that he was a Hollywood resident, of course he was in a few movies:  The Game; Mondo Hollywood, Swingin' Summer, and Confessions of Tom Harris.
An early advocate for healthy products, he became a spokesman for kyolic garlic. He did some PR for a Sonoma cheese factory, offering garlic-flavored "Sonoma Jack" cheese at his booths at health fairs and at fairs in the Sonoma valley. 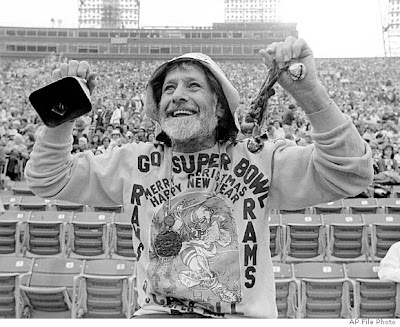 In his later life he could still be seen at health food stores, health fairs, and farmers' markets.  He was an avid football fan, especially of the USC Trojans, and at age 86 he could throw a football forty yards. 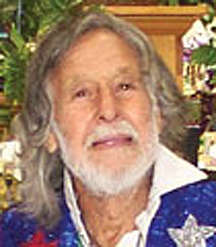 He died just eleven days short of his 90th birthday in 2004.  He is most probably remembered as one of those Hollywood/Southern California weirdos, especially to those who have lived in a rigid box.  Quirky, warm, funny, and the precursor to the Energizer Bunny, I will remember him as someone who "found" himself early in his life, and dared to be that person long before some of the things he advocated became not only acceptable, but "cool".  It was serendipitous to have found the photo above, courtesy of the Whole Wheatery, a health food store near my neck of the woods.  It was here that I saw him last, not long before he passed.  We spoke of the old days (he remembered the health food store and hanging out in the parking lot passing out fruit, but not, alas, me!) and the changes he'd seen in his lifetime.  He gave me a booklet he was selling and autographed it for me.  What a guy!
***************
Images unless otherwise noted from his personal website.
*******************************
Posted by Linda Hedrick at 12:01 AM 0 comments