Colored eggs have been associated with Vernal festivals since ancient times. Ancient Greeks and Romans used eggs as symbols of fertility, rebirth, and abundance.  This pagan symbol of the rebirth of the earth in celebration of spring was adopted by early Christians as a symbol of the resurrection of Jesus.  The egg had previously figured in the festivals of numerous resurrected gods, since it is dormant but has new life sealed within it.

The ancient Zoroastrians painted eggs for Nowrooz, their New Year celebration which falls on the Vernal equinox, making it now a tradition of approximately 2,500 years.  For the Passover Seder, also held in spring, hard-boiled eggs called Betzah are dipped in salt water which symbolizes the peace offerings sacrificed at the temple in Jerusalem.

My Greek mother always insisted on red eggs, and we tapped each other's eggs together to see whose cracked (more on cracking eggs tomorrow).  The Orthodox and Eastern Catholic churches dyed their eggs red.  The red symbolizes the blood of Christ. One of the sacred traditions of Eastern Christianity is the story of Mary Magdalene bringing eggs to share with the other women keeping watch at the tomb of Jesus. When she saw the risen Christ, the eggs in her basket turned red. The egg also represents the boulder at the tomb, and the cracking of eggs symbolizes the resurrection.


The Germans had a tradition of the Osterhas - the Easter bunny, which German settlers brought to the U.S.  Modern custom often uses chocolate eggs or plastic eggs filled with goodies, placed in baskets with artificial grass or straw to resemble a nest.  Tradition is to hide these eggs - real, chocolate, or plastic - for children to find on Easter morning.


Many countries have egg decorating traditions.  Russia, Ukraine, Bulgaria, Romania, Poland and other Slavic countries make them into works of art:


Eggs were forbidden food during traditional feast days in Western Christianity, and still are in Eastern Christian churches.  Both meat and dairy were forbidden, and eggs were considered dairy (a foodstuff from an animal gained without killing it). This included Lent.  Therefore, it was necessary to use up the egg supply before Lent.  Hence the name "Mardi Gras", or "Fat Tuesday", for the Tuesday before Lent -  all the eggs and dairy would have to be consumed by this day.  Since chickens cannot be told to stop producing for a while, their eggs would be boiled to prevent them from spoiling.


One of the most beautiful "art eggs" is any of the thousand or so made by Fabergé. The one below was commissioned by Czar Alexander III of Russia for his wife, Maria Fyodorovna... 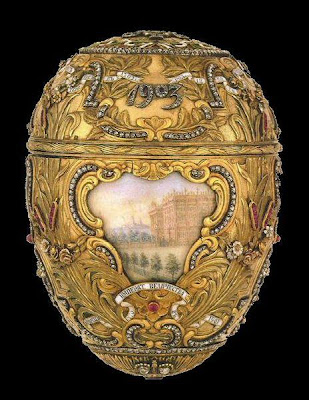 There are many other decorating styles, and also traditions for giving decorated eggs.  Sometimes they have been given as gifts in love, friendship or as tokens of esteem.  Below are a few more from other cultures as inspiration: