First of all, why a rabbit?  Most likely the animal selected to represent Easter was a hare, not a rabbit.  Hares are generally larger than rabbits, have longer ears, and black markings on their fur.  While rabbits have been domesticated and kept as pets, hares have not been.  But the major difference in regard to Easter is that hares do not bear their young in burrows like rabbits.  Rabbits must use underground warrens because their young are born hairless and blind.  Baby hares are born with fur and eyes open, and can function on their own quickly.  So they are born in forms, shallow depressions or flattened nests of grass.  Some birds lay their eggs in the grass, and that may account for the confusion as to who laid the eggs.


Hares are an ancient symbol among many cultures, from China to Peru.  They represent fertility (for obvious reasons) and especially the rising fertility of the earth in the spring.  The Vernal Equinox was considered an especially fecund time since it was thought that the male and female energies were balanced.  Both hares and rabbits can conceive a second litter while still pregnant with the first litter, and mature sexually at an early age, the perfect symbol of fruitfulness. 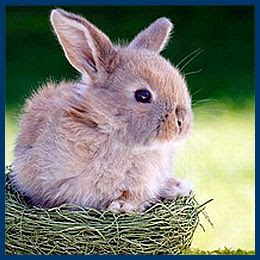 Hares are/were sacred to many cultures and often associated with lunar deities. Hares are often depicted in "moon gazing" poses.  In China, the hare was thought to be gazing up at his ancestors in the moon.  The goddess Eostre (there are various spellings) was a Saxon deity in the second century, and later was very popular with Germanic peoples.  They told their children about the Osterhas (hase means "hare" in German, and not "rabbit"), who brought gifts of colored eggs to good children.


The Christian church was very clever in its proselytizing, and finding that while people were willing to accept another name for their gods, they were much more reluctant to give up their rituals.  So pagan practices were incorporated into Christian festivals.

Folklorists have been trying to tease the meaning out of the Easter bunny/eggs/celebration and it makes for interesting reading, although there is no consensus of opinion as to their origins.  In the next few days we'll look at Easter Eggs, Easter rituals, and other related topics.