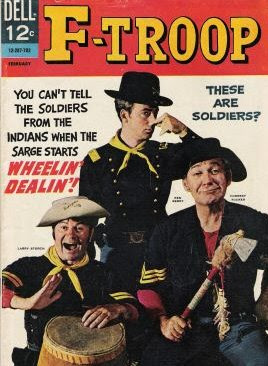 Missing my dad, which happens often, I began to reminisce about happy times that we shared.  Since he worked all day and often into the evening, plus commuted over an hour each way, he just liked to veg when he came home.  But that wasn't always possible, since my mother didn't drive and we lived far from any stores. On those nights when he got home early, without any errands, he would sit with me and watch TV.  We always laughed watching F Troop. 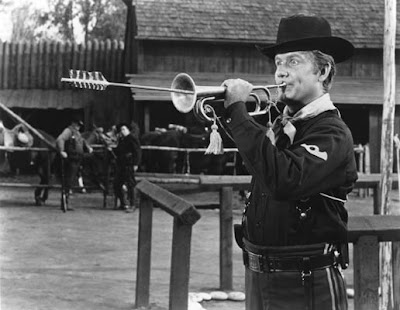 Although it only ran for two seasons, F Troop, the satirical American television sitcom about a fictional U.S. Army outpost in the Old West, grew more popular in syndication.  Like other two-year series of that era - The Munsters, The Addams Family, and The Monkees - it became a favorite long after the show was cancelled. Seems TV execs in the 60s weren't too hep on what the public liked. 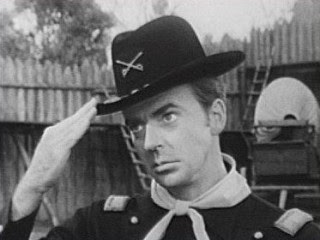 Fort Courage, Kansas, is the fictional location for the show, which is set in the time just after the Civil War in 1865.  It was named for the bogus General Sam Courage, played by Cliff Arquette (grandfather of Rosanna, Patricia, and David).  The commanding officer was Captain Parmenter (Ken Berry), who was elevated to captain when he sneezed as he was getting his commanding officer's laundry.  The sneezing was interpreted as a signal which launched the final successful charge at the Battle of Appomattox, earning him the promotion but assigning him to Fort Courage where misfits were sent.  He also received the Purple Heart (which didn't exist at that time) for the wound he received being pricked by the Medal of Honor he was awarded when it was pinned on him. 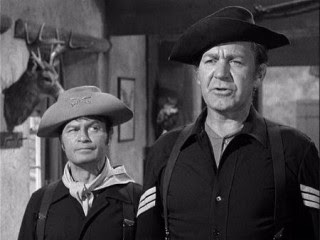 Almost completely inaccurate historically, the series was popular for its sight gags, burlesque comedy, and its characters.  Sergeant O'Rourke (Forrest Tucker) and Corporal Agarn (Larry Storch) were the central figures, always scheming and entertaining new business ventures as part of "O'Rourke Enterprises".  Although they played on Captain Parmenter's naïveté, they were amiable and protective of him, and they formed a hapless trio. 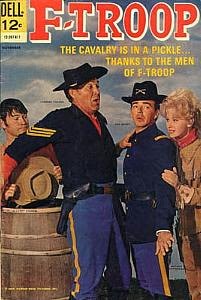 Some of the historical errors are pretty obvious.  Little Bighorn is mentioned several times, although the battle didn't take place until ten years after the show was taking place.  There is reference to General Custer, but Custer's commission as general had expired at the beginning of 1866, and he was downgraded to captain. Captain Parmenter, in addition to receiving the then non-existent Purple Heart, was also awarded the Silver Star, which wasn't created until 1918.  In one episode a line from the song "Jeepers Creepers" was quoted, although the song wasn't written until 1938.  Another episode features a "Singing Mountie", but the Mounties weren't founded until 1873.  Bob Dylan's "Tambourine Man" was sung, which was written in 1964 so was fairly new then.  But nobody watched to learn history. 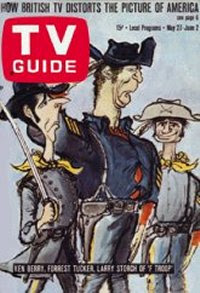 The local tribe was the "Hekawi", named from the time they were lost and asked, "Where the heck are we?"  It was originally "Fugawi", but the censors caught on to that one.  They produced the products for O'Rourke Enterprises, and were 50/50 partners.  They also had a still that made the whiskey for the saloon.  Alluding to the concept that Native Americans came from the 13th tribe of Israel, many of the actors were Yiddish comedy veterans and used Yiddish shtick.  Chief Wild Eagle (Frank DeKova) said the peaceful tribe originated in Massachusetts, until the Pilgrims came and "ruined the neighborhood". 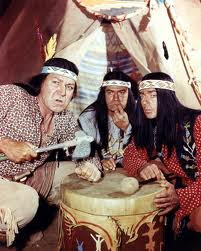 Parmenter, especially in the first season, spends much of his time avoiding the matrimonial intents of shopkeeper "Wrangler Jane".  Played by Melody Patterson, there is a valid reason for his standoffishness in that first season.  She had lied about her age to get the part, and was fifteen when she auditioned and sixteen when filming, so the romance was kept low key.  She turned eighteen by the start of the second season, so things heated up and she became much more aggressive. 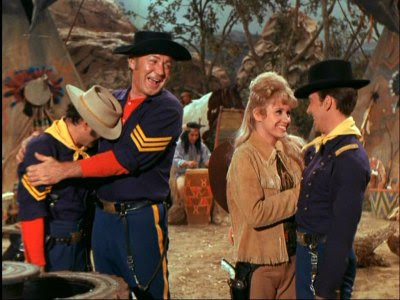 There were many famous guest stars, including Phil Harris, Milton Berle, Vincent Price, Sterling Holloway, Paul Lynde, and Zsa Zsa Gabor, to name but a few.  Filmed in black-and-white the first season, it was filmed in color the second season.  The show was discontinued because it was thought to be wasteful to spend so much time on Warner Ranch for a half-hour TV show, and the studio was unhappy that the costs of filming in color were so high. 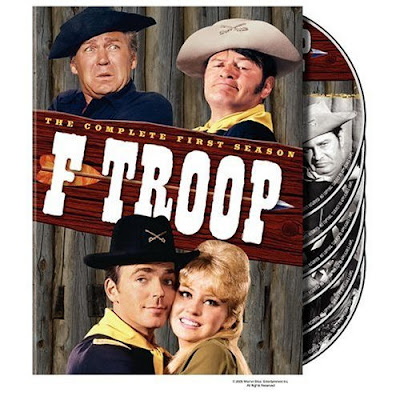 In 2005, director Bobby Logan announced he is planning a film version of F Troop to begin production in the summer of 2012.  In the meantime, both seasons are available on DVD, for those who want to revisit the stumbling crew of misfits.