Piñatas are popular the world over, especially as part of children's birthday celebrations.  But they have a long history, and in Mexico and Spain they are associated with religious celebrations - Lent and Christmas in particular.  In Spain a costume ball is held on the first Sunday in Lent - el baile de Piñatas - that ends with breaking a piñata.


Like everything with a possible Asian origin, piñatas are said to have been brought to Europe by Marco Polo, perhaps the most amazing man in world history for the ever-increasing number of things he introduced.  The Chinese were said to use decorated clay pots filled with goodies during their Spring Festival, i.e. New Year celebrations.  When broken, seeds spilled out - apropos for a spring ritual -  then afterward what remained was burned and the ashes gathered for good luck throughout the year.

The original piñatas in Mexico and Spain were made from clay pots that were decorated.  The custom of beating them in order to break them open is thought to have begun in Italy.  The Spanish word piñata seems to come from the Italian word pignatta which was a squat clay pot shaped like a pinecone or pigna in Italian.  The Spanish used the word piña or pinecone.  The Latin word from whence both the Italian and Spanish words are derived is pinea (pinecone), from the pinus, or pine tree.


The native peoples of Mexico, including the Aztecs and Mayans, also made clay pots, interestingly enough, although these were in the shape of their gods.  They were adorned with colored feathers and hung, sometimes in temples, and filled with beads, painted or colored rocks, berries and nuts.  When the piñata was broken and these items spilled out they were considered gifts from that god.  The Mayans played a game where the person striking at the piñata was blindfolded while he tried to hit it.


When the Spanish brought the piñata practice to Mexico it was readily accepted since it was a familiar concept.  But in the 16th century, the Spanish missionaries used the piñata to reach converts.  Cleverly, they made them in the shape of a globe with seven cones coming off it, and this is the standard type of piñata still today.


The central sphere represents the devil, and the seven cones signify the seven deadly sins:  anger, envy, greed, gluttony, lust, pride, and sloth.  They taught that the blindfolding signified faith, the stick used for beating was the will to overcome sin, and the goodies inside were the treasures of heaven (like the gifts from the gods).  The subtle message the friars were sending was that faith and intention could overcome sin, and with them one could receive the rewards of heaven.

There is a traditional song that is sung while swinging at the piñata, of which the following is one variation:


Dale!  Dale!  Dale!
No pierdas eltino,
Porque si lo pierdes,
Pierdes el camino,
Esta piñata es de muchas mañas,
Solor contiene naranjas y cañas.
Give it a hit!  Give it a hit!  Give it a hit!
Don't lose your aim,
Because if you lose it,
You will lose your way,
This piñata is wily,
But it only contains oranges and sugar cane.
Although the traditional shape is still the sphere with seven cones, today one can find a wide variety of shapes, including caricatures of popular figures and celebrities: 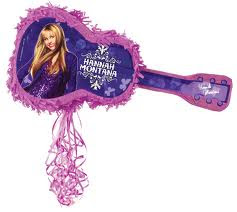 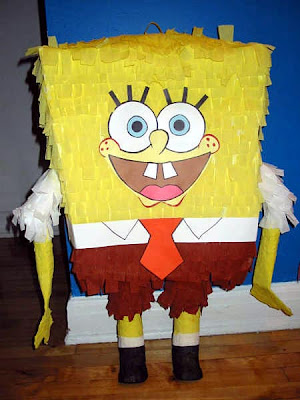 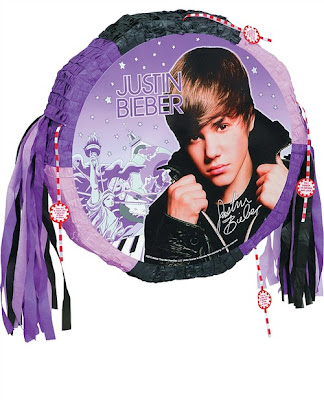 It's very interesting that the New World had a tradition similar to the Old World before they interacted.  It is also very interesting that this tradition has not only endured throughout the centuries, but has become popular internationally.  Maybe there's still hope for world peace - no, wait, the commonality was beating with sticks, as is the popularity.  Oh, well.....