When I was three my parents bought their first house.  We moved to the new city of Granada Hills in the northern San Fernando Valley.  Right across from us was a hill, which is unrecognizable today with all the development, that was bare except for an old stone wall and a line of trees.  About a mile or two away was the San Fernando Mission, and between them were Sunkist orange groves.


The smell of blossoming oranges is still one of my favorite scents.  To get to the hill or the groves and mission my little buddies and I had to cross two very busy boulevards - Rinaldi or Sepulveda.  In the days before freeways, these were the main routes to get anywhere, so we were forbidden to cross them by ourselves. Therefore, of course, we crossed them all the time.  The orange groves were gorgeous when blossoming, and once they fruited we were there daily.  The pickers would throw us oranges and we would gorge on them.  Happy times.


A few decades later and I had occasion to consider those groves again.  I worked for the Southern Pacific and one of my buddies had the same days off as me.  We used to take at least one of our days off and do something off-beat.  One day he said we were going to a meeting of fruit label collectors in the Valley. 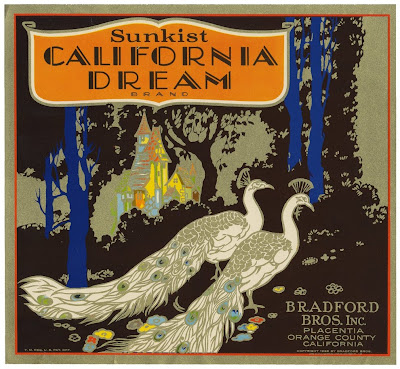 We went, listened to their speaker, entered a drawing for some labels, and bought some.  We went several times, until they changed their meeting day, and met some really interesting people.  I still have those labels in my safe and secure SSSNEICFI (Someplace So Safe Not Even I Can Find It) where they await my framing them.  Next house. 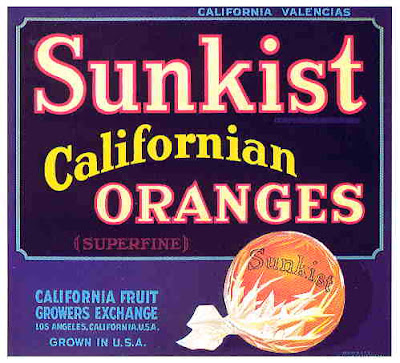 Today Sunkist Growers, Inc. is one of the ten largest marketing cooperatives in the U.S.  It is a not-for-profit organization composed of California and Arizona citrus growers.  The cooperative markets oranges, lemons, grapefruit, and tangerines in the U.S. and abroad.  Owned and controlled by its members, a majority of which farm 40 acres or less, members are the only individuals eligible to sit on its board of directors.  It is headquartered in Sherman Oaks, California, in the San Fernando Valley. 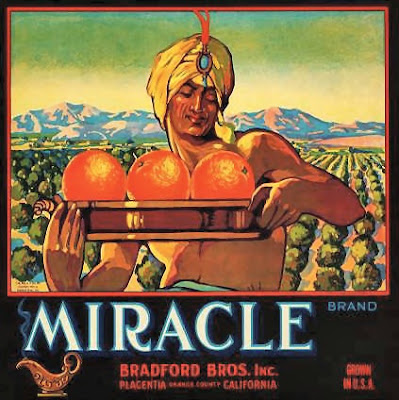 First formed in 1893 as the Southern California Fruit Exchange in Claremont by P.J. Dreher, the Exchange included growers and groves in Pomona, Riverside, and San Dimas in Los Angeles County, as well as Santa Paula, Saticoy, Fillmore, and Piru, among others, in Ventura County.  By 1905 the Exchange had 5,000 members - 45% of the California citrus industry.  The name "Sunkist" was adopted in 1908 to refer to their superior citrus, making the Exchange the first to brand fruit.


The events that promoted the growth of the citrus industry prompted the eventual formation of the cooperative group.  One of these was the California Gold Rush in 1848.  As waves of people came to California to make their fortunes, the state was hard-pressed to provide food.  Fruits and vegetables, in particular, were in short supply, thus much of the new population developed scurvy.  Citrus production increased as a result; lemons brought a price of one dollar each. 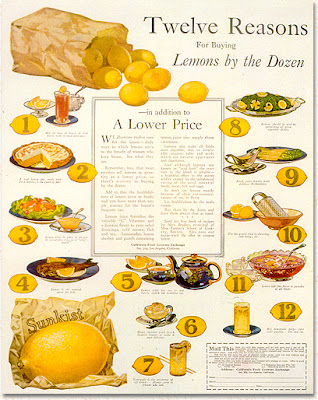 The next momentous event was the completion of the transcontinental railroad in 1870.  The first Special Orange Train left Los Angeles River Station on February 14, 1886 via the Southern Pacific and Union Pacific railroads and went to the Missouri River.  Ten years later more than 2,000 cars were shipped annually, and five years later that number doubled.  The planting of citrus groves also increased. Between 1880 - 1893, the citrus acreage in California went from 3,000 acres to more than 40,000.


But during this boom and all its profits, growers began to watch everyone else making big money on their fruit, agents in particular.  The growers were making "peanuts".  Things got worse when agents decided not to purchase citrus fruits F.O.B. - freight on board.  (This term is used for purchases where the buyer pays shipping costs and assumes risks of damage and delay in shipping not caused by the shipper.)  The agents insisted that they would only handle the fruit on consignment, which shifted all the risks to the independent growers.  There were years of losses - the "Red Ink" years - which forced them to rethink their position. They realized that they had less and less power over their businesses, and decided collective action was called for.


Although other attempts made to band growers when commission houses refused to purchase fruit F.O.B. were futile, they laid the foundation for the Southern California Fruit Growers Exchange's success.  The Exchange was a federated structure, member-owned and operated, composed of regional marketing cooperatives called district exchanges.  Through regulating shipments and sending fruit where the demand was highest, the Exchange made an immediate and profitable impact on its members.  At the end of the first season growers realized about $1 per box, up from $.25 per box that they were likely to have made without the Exchange.  This prompted other growers to join.


As other areas witnessed the benefits of the Exchange and wanted to join, particularly growers in the San Joaquin Valley, the Exchange extended its range to include growers from the entire state of California, dropping the word "Southern" from its name.  The Exchange owned little besides its office furniture - no groves or property, no interest in the packinghouses or district exchanges. 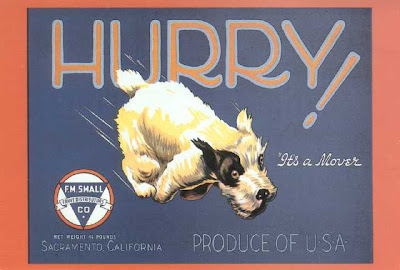 In 1907 the Exchange formed its own timber supply company when it was unable to obtain a steady supply of wood for packing crates at a reasonable price.  The Fruit Growers Supply Company was also one of the Exchange's early attempts at advertising.  The wooden shipping boxes were 12"x12"x27" with labels that were 10"x11" on the ends.  Growers and packers created their own labels.  These wooden boxes were used until the mid-1950s when they were replaced by cardboard boxes with preprinted labels.  This abrupt change left large numbers of unused labels, which were gradually depleted by collectors. 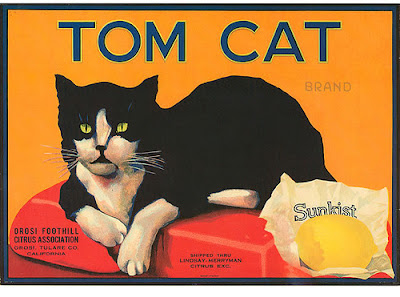 In that same year the Exchange launched the first perishable food product advertising, using the Sunkist brand name.  Today that Sunkist trademark is one of the most recognizable trademarks in the world. In 1952 the cooperative changed their name to Sunkist Growers.


When revenue dwindled due to their production exceeding local markets, new venues were needed.  The cooperative's first big foreign market was Europe.  By the late 1960s more than 12,000,000 cartons were shipped abroad annually, and they controlled about 80% of the citrus crop at home.  Membership soon dropped, however, endangering the cooperative's survival.  Membership requirements were relaxed, overhead costs reduced, and a new subsidiary - Sunkist Real Estate, Inc. - was created to offer members real estate, financial, and investment services and short-term financing.  Membership increased, and the cooperative endures. 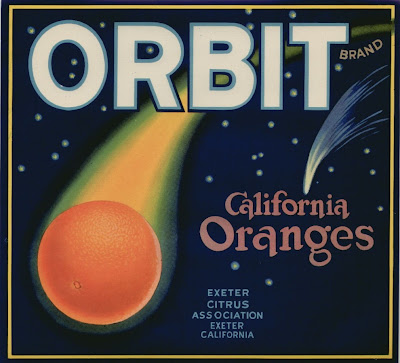 The Sunkist brand now represents 600 products in over 45 countries on five continents, although not necessarily their own products but under their license. Sunkist soft drinks are produced by the Dr. Pepper Snapple Group, Sunkist Fruit Gems are a soft fruit candy made by Jelly Belly, and Sunkist Fruit Snacks, Fruit and Grain Bars, and baking mixes are made by General Mills.  By licensing the Sunkist trademark, the cooperative significantly augmented their revenue.
To think it all started with oranges, a hybrid fruit with an ancient pedigree, thought to be a cross of a pomelo and a mandarin.  Oranges originated in Southeast Asia, and were cultivated in China by 2500 BCE.  The name came originally from the Sanskrit, passing through numerous intermediate tongues.  (Sanskrit nagarugam, Persian nārang, Arabic nāranj, Spanish naranja, Late Latin arangia, Italian arancia, and old French orenge.)  The first appearance of the word in English was in the 14th century, and the name of the color, taken from the fruit, appeared in 1542.
I'm guessing no one is in favor of getting rid of these immigrants...
***************
Unless otherwise noted, all images courtesy of Sunkist Growers, Inc.
*******************************
Posted by Linda Hedrick at 12:01 AM