London in the 19th century was an interesting place.  The streets were as dirty as any large city, and because of diseases like typhoid and cholera, which killed many people, drinking the water was not considered wise.  To quench their thirst people often bought apples from costermongers, originally street sellers who later became market sellers.  Costermongers would wander the streets with baskets of fruits and vegetables where they would eke a meager living.  They were often cheeky and colorful characters, and not all too well appreciated by the carriage trade.  Their repartee became their idiosyncrasy, and they became more flamboyant as time went on.

Costermongers could be found in London life since the eleventh century, and were originally itinerant, often chased by the authorities.  They were referred to as cockneys, initially a derogatory name.  They traded in family groups, and eventually each district elected a Coster king as a spokeman when their rights came in question.  This was in essence an early trade union of sorts.  The women were equally outspoken and something to deal with.  Their children inherited their "royal" titles.

It began to be popular among the elite to wear pearls as a fashion accessory.  In parody of this trend, some costermongers began to sew pearlized buttons, first down their trousers, then on caps and other articles of clothing.  This "flash" of buttons earned them the name of "flash boys", and made them stand out from other traders, and soon this became their trademark.


Along with their cameraderie was a sense of loyalty to one another.  This was a hard scrabble life, and although they worked independently and competitively, they also looked after each other.  If one of them fell on particularly hard times, the others would chip in and organize collections to provide for them.  This habit of fundraising and being charitable became ingrained in their lives.


Henry Croft was born in 1862 and raised in a London orphanage.  When he was 13 he got a job to be a sweeper and rat catcher at a local market.  He apparently became fascinated with the "flash boys", and soon became friends with them.  He started collecting all the pearl buttons he could find, and sewed them on an old worn-out suit that someone threw out.  He created various patterns until the entire suit was covered.  One of the patterns were the words "All for Charity", and another was "Pity the Poor".

He found himself the center of attention, and hospitals and churches asked him to help with their fundraising events.  He continued collecting both money and goods for those in need, and returned often to provide for the orphanage he came from. As he and his costermonger friends started concentrating on charities, they became known as the "Coster Kings and Queens", then eventually the "Pearly Kings and Queens".  They all designed their own "smother suits" - smothered with pearl buttons.  Some of these can weigh over 65 pounds, but others have simpler designs and are known as "skeleton suits".  Some of the more common design elements include:


*  horseshoe = good luck
*  doves = peace
*  heart = charity
*  wheel = circle of life
* anchor = hope
*  cross = faith
*  flower pots or donkey carts = costermongers
Henry Croft became so well-known and beloved, that when he died in 1930 his funeral was filmed by Pathe' News and there were over 400 people in attendance. The charities that he had helped all chipped in and had a statue made in his honor, now on display at St. Martins in the Field.  He was estimated to have raised almost $7,000 for charities (today that would be over $317,000), a huge amount at that time.
Eventually there was a "Pearly" family for every borough in London, and thus the Pearly Kings and Queens endure.  They are unique in that they are a tradition from the working class.  Due to the disagreements that occur in many large groups there are now rival groups, each associated with a church in central London, and all work to raise money for London-based charities.  They are known as "Pearlies" for short. 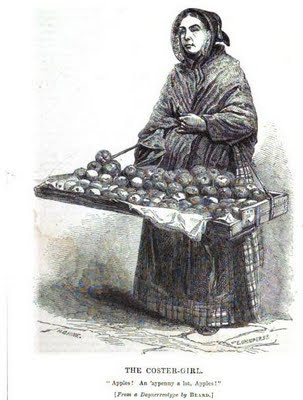