In the time before written numbers, humans had a need to count.  Hands came in, well, handy, but that limited the count to five or ten.  If one had to go over that number, something was needed to keep count of the count.  Stones, pebbles, twigs and the like were probably used, as were marks in the dirt or sand.  But what was really needed was a counting device.


If you have ever seen an abacist (one who uses an abacus) at work you were probably amazed at their speed and accuracy.  An abacus is a type of counting board.  Ancient counting boards look like games, usually with grooves for pebbles or markers.  Often made of wood, metal, or marble, they were large, and since the markers could be removed, not very portable.  Abacuses (or abaci - there is no preferred plural) were different in that they were frames with rods on which beads could be moved.  Most importantly, they were portable. 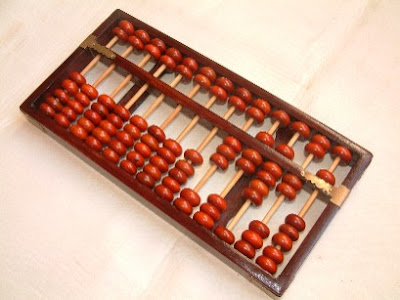 The term "abacus" is from the Greek abakos - a calculating table - that is from the Hebrew abq, meaning dust or sand.  The first evidence of one is from Sumeria, circa 2700-2300 BCE, which was a table of successive columns.  Too primitive for complex calculations, it was probably just used for adding and subtracting.  The Sumerian system was based on a sexgesimal number system, which is base 60 and still in use for measuring time, angles, and geographic coordinates that are angles.  It is excellent for doing fractions, as it has 12 factors of which 3 are prime numbers (1, 2, 3, 4, 5, 6, 10, 12, 15, 20, 30, 60).

Herodotus mentions the use of the abacus in ancient Egypt, however there are no paintings or wall reliefs of one, which casts some doubts.  However, archaeologists have found disks that could be markers.  But then again they could be game pieces.


The oldest counting board as yet found dates from about 300 BCE.  It was found in 1846 on the Greek island of Salamis.  It is a slab of white marble measuring 59" long by 30" wide and is 2" thick.  It has five groups of markings.  Three sets of Greek symbols (acrophonic system - their symbols come from the first letter of the word for that number, hence the symbol is an abbreviation of that number) are down both sides and the bottom of the slab.


The Romans first calculated by moving pebbles (calculi) on a smooth table. Marked lines indicated units of the Roman numeral system.  This system of "counter casting" continued into medieval times in Europe.  But in early Rome wax abacuses, boards with thin layers of wax, were used with a stylus, as reported by Horace in the 1st century BCE.  By the 1st century CE, abacuses like the reconstructed one below (in copper) were used.


Later on in Rome and in medieval Europe, jetons were used.  These were coin-like medals that were mass produced in Europe from the 13th to the 17th centuries. They were also used as a money substitute, much like poker chips.  Nuremberg was an important production center of them.


Russian abacuses have ten beads on a wire, plus one with four beads for quarter fractions.  So simple and inexpensive, it was used all over in the former Soviet Union and taught in most schools until the 1990s when the mass production of calculators replaced it.


In Asia and Africa, abacuses are still in use.  The earliest written reference to an abacus in China is from the 2nd century BCE.  They were known as suànpán, or counting trays.  They did both decimal and hexadecimal computations.  It is unclear whether they were influenced by or influenced the Roman abacus, but clearly there seems to be a connection, and the idea would have traveled along the Silk Route.  Currently in China there are techniques taught in school to do multiplication, division, square roots, and cubic roots.  The abacus was adopted in Korea from China circa 1400 CE.  A 1st century Sanskrit text, the Abhidarma-kosa, in India describes the use of an abacus.


Japan imported the abacus from China about 1600, and its use became widespread by 1930.  Techniques are also taught in primary schools as a part of the mathematics curriculum today to aid in faster mental calculations.  When used in visual imagery, it is said to be as fast or faster than actually using one physically.


A neopohualtzintzin is a five-digit, base 20 system that was apparently used by the Mayans, Aztecs, and Olmecs until the European conquest.  Mexican engineer David Esparza Hildago reconstructed it from engravings and paintings he found. The Inkas used the quipu - a system of knotted cords - to record numerical data, but not for calculating.  They also used a yupana, but how it was used is unknown. Mathematicians have suggested that it was based on the Fibonacci sequence, however.


Even though most modern homes have an electronic calculator, these devices can do multiple operations but can't teach you how to do them.  Abacuses require knowing how to calculate.  Tim Cranmer is the inventor of an abacus to teach the blind mathematical skills, which even talking calculators can't teach them.  It is an abacus with a soft fabric or rubber backing which can keep the beads still and in place.  Blind students can perform addition, subtraction, multiplication, division, square roots, and cubic roots with it.  Just as people have done for thousands of years.