The Silence of the Monks

Monastic silence is the providence of many religions.  It is thought to offer the best opportunity for meditation, purity of thoughts, and closeness to God.  It can be observed for short or long periods of time, for certain occasions or situations, and can be communal or individual.


Since ancient times, the observation of silence has been practiced.  Pythagoras had a strict rule of silence for his disciples.  The Roman Vestal virgins were bound by vows of silence.


Nearly every monastic tradition all over the world has a tradition of silence.  In the West, it is more highly developed in Catholicism than in Protestantism.  Silence, in a monastic setting, can mean absolute quiet, or speaking in low tones.  Some monasteries had rules for silence in certain areas or specific times.  Practicing silence applied to guests as well as resident monks.


Certainly there was a need for communicating the basic needs, and to this end a code of hand gestures developed to convey basic thoughts regarding work and spirit.  Most of these gestures dealt with food, people, and items used in worship. A lot of them are mimetic, such as the gesture of a hand ringing a bell to express a deacon, since he was the one to ring the bell in rituals.


In the West, monastic sign languages were used in Europe since the 10th century, and are still in use in the Cistercian and Trappist traditions.  They are not like the sign languages that deaf people use, but are more gestural, leading some scholars to refer to them as sign lexicons.


In medieval Benedictine monasteries, from Portugal to England, there is documentation for these sign lexicons.  Most are nouns, and the few verbs deal with sitting, standing, kneeling, and confessing.  There was no grammar assigned to these gestures, and they probably used the word order of the language most spoken, whether it was Latin or a vernacular.  Vocabulary lists from medieval texts range in number from 52 to 472 signs, with an average of around 178.


Fingerspelling was also used.  The most simplest form is writing letters in the air or tracing them on the hand.  This sort of communication serves as a bridge between spoken and sign languages.  People who are adept at both sign language and fingerspelling communicate by looking at the "speaker's" face, and reading the signs peripherally.  While fingers have been used for counting, scholars think that the practice of substituting letters for numbers, called gematria, was also common in ancient times.


The earliest known finger alphabet was described by Bede, the Benedictine monk, in the 8th century.  While his purpose is unknown, it may have been devised for teaching deaf people.  (Bede became deaf late in life.)  Some scholars consider this a game.


Monks may have influenced, and in turn been influenced, by the popularity of manual alphabets for secret communication.  Arthrological systems, where letters are indicated by pointing to different parts of the fingers and palm, were in use by hearing people for some time in England.  Some have speculated that they were derived from early Ogham manual alphabets.

Sign languages for the deaf developed independently, although it is hard to not think there must have been some interaction.  The monastic gestures were all common sense:  to ask for a candlestick, blow on your forefinger; if you wish a person to rise, turn your hand and move it up quickly in stages;  the sign for porridge was to move your fist as if stirring porridge;  the sign for honey was to set your finger on your tongue; if you wished to have more fish, you would put your hands together and move them back and forth like a fish waving its tail. 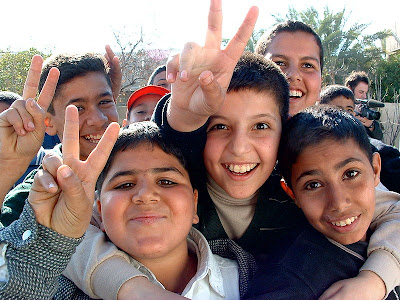 Today we have some iconic gestures, understood the world over.  The "victory" or "peace" sign, above, is certainly one of them.  Then, for us geeks, there is the one below, meaning "live long and prosper". 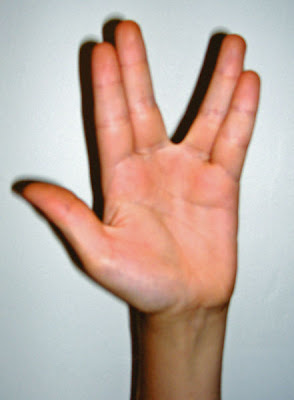