The Povey Brothers: Harbingers of Art Glass in the Pacific Northwest

The Pacific Northwest is a Mecca for art glass.  Oregon has perhaps more than their fair share of glass artists and glass producers.  Nor is this a recent thing.  One of the most famous and largest art glass companies in Oregon was a bustling force in the years 1888-1928.  The Povey Brothers Studio, also known as Povey Brothers Art Glass Works or Povey Brothers Glass Company, was making windows for customers throughout the West.


Portland, where the Povey Brothers Studio was based, at the time had a population of 42,000.  Today Portland's population is closer to 585,000, and is home to many art glass businesses, and two well-known glass manufacturers, Bullseye and Uroboros.  In their era, Povey Brothers was known as the "Tiffany of the Northwest", and many of their windows can be found in historic buildings as well as in homes, businesses, and churches.  These are of incredible beauty and quality.


David Lincoln Povey founded the company.  His family had been in the stained glass business for generations and his father had immigrated from England.  David Povey formed the company with his brother John, who was the main craftsman while David did the designing.  Another brother handled the business end, and they had two sisters who also worked with them.  At their height they had 25 employees. 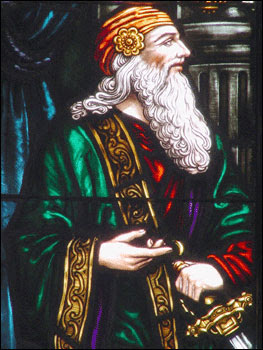 When David died in 1924 his sons took over.  They hired Albert Gerlach, who remained with the company when it was later sold to W. P. Fuller in 1930.  John Povey died in 1917.  Portland architect Polly Povey Thompson, David's daughter, had planned to write a book on the Poveys but died in 1994 before completing it.


The studio used a variety of glass - rippled, crackled, machine-rolled - buying much of it from Europe, but also from Kokomo in Indiana.  They used a lot of small, faceted pieces, known as "jewels", which is one of the distinctions of their style.  Many of their windows, particularly their religious ones, had painted glass pieces.  They also used a lot of clear glass for backgrounds, to allow what light was available to enter the building, as the Pacific Northwest is known for being overcast.

Patrons at that time used stained glass windows as a show of wealth and status. Arts and Crafts style motifs were common, as were Art Nouveau.  One of the signature items in the studio's windows was dogwood, a popular selection for those styles.  David Povey designed almost all the studio's windows.  Residential designs were mostly of standard size, but the ones commissioned by businesses and churches were often imposing and so huge they had to be done in panels.


At first none of their windows were signed, leading other glass artists to imitate and impersonate the studio's work.  In 1923, David Povey began signing the windows with the year of completion and "Povey Brothers Studio" on them. 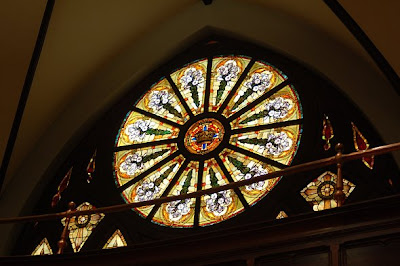 Many of their extant works are in buildings that are listed on the National Register of Historic Places.  It is quite a distinction to have a Povey window, and they are frequently available for purchase for buyers who wish to obtain a piece of history, and a beautiful one at that.


Because of the workmanship involved in a well-done piece, and the price of materials and the time required, stained glass windows are still a luxury item.  The Poveys brought their craft from England and solidly established themselves in the U.S., carrying on and retaining a tradition that is still respected.  If you are in Oregon, you should visit these gorgeous works of art.