A Cookie's Fame and Fortune 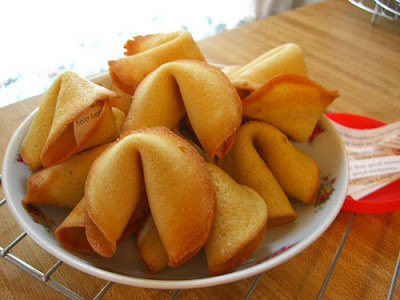 A fortune cookie is a perhaps a strange thing to write a graduate thesis on, but that's what Yasuko Nakamachi did.  The folklore and history graduate of Kanagawa University spend over six years researching the origin of the fortune cookie.


Prior to her research there were Chinese and Japanese factions claiming the invention.  It was even thought to be an American product, albeit invented by either Chinese or Japanese immigrants.  They were popularized in the early 20th century in the U.S.


Both China and Japan have a history of fortune telling.  China's Kau Cim is a practice usually performed in front of an altar in a Taoist or Buddhist temple.  Kau Cim uses flat sticks with a different number inscribed on each, stored in a tube. The querent shakes the tube and tips it so one stick falls out.  The number on the stick corresponds to a number on a piece of paper, which is supposed to be the answer to the question the querent was thinking.  In Japan there is a temple tradition of random fortunes known as Omikuji.  These fortunes are written on strips of paper at Shinto shrines and Buddhist temples.  The word literally means "sacred lot", and they are chosen from a box after one makes a small offering. Today they are available from machines.


Senbei (sometimes sembei) are bite-sized Japanese rice crackers that come in various sizes, shapes, and flavors, usually savory.  They are often served with green tea and offered to guests as a snack.  Ms. Nakamachi believes that a type of senbei - tsujiura senbei - was the antecedent to the modern fortune cookie.  Her earliest reference to them was from a book Haru no Wakakusa (Spring Grass) by Shunsui Tamenga, circa 1830-1844, which featured tsujiura.  She also came across a woodblock print from the National Diet Library (Japan's answer to the Library of Congress) which was used as an illustration for a story from the Meiji era (1868-1912) Moshiogusa Kinsei Kidan (Moshiogusa Modern Amazing Stories).


Ms. Nakamachi traveled all over Japan visiting temples and interviewing people. She then went to San Francisco and Los Angeles, both cities claimants to making the first fortune cookies, and interviewed descendants of Japanese and Chinese immigrant families who made them.  She concluded that the fortune cookie is of Japanese origin, and was introduced to the U.S. in 1914 by Makoto Hagiwara at the Japanese Tea Garden in San Francisco's Golden Gate Park.  The original tsujiura senbei she documented back to 1847 in Japan.


The main difference between the original tsujiura senbei and the fortune cookie is the flavoring.  The tsujiura senbei are made with miso instead of butter, and sesame instead of vanilla.  The manufacture of fortune cookies was dominated by Japanese-Americans until WWII.  Then over 100,000 Japanese were placed in interment camps, and anything Japanese was not looked upon favorably.  Chinese-Americans took over their production.  Chinese restaurants had been eager buyers since their inception, one reason being that Chinese cuisine is not noted for their dessert menu, and this was an easy and cheap way to fill that void for U.S. patrons.


How the popularity of fortune cookies spread is thought to be from G.I.s who served in California.  When they returned to their homes and frequented Chinese restaurants, they began to ask for fortune cookies, and they quickly spread across the country.


There are now approximately 3 billion fortune cookies made each year worldwide, mostly for U.S. consumption.  The largest manufacturer is Wonton Food, Inc., headquartered in Brooklyn, which makes over 4.5 million per day, with a database of over 10,000 different fortunes.  There are also companies who will make custom fortune cookies.


There are many superstitions about how one should deal with a fortune cookie. Some believe that you should not eat the cookie if you don't like the fortune. Others say you must eat the cookie first, then read the fortune.  Another insists that each person should choose the cookie facing them with "open arms".  There is even a common joke about fortune cookies that adds the phrase "between the sheets" or "in bed" after the fortune, creating silly messages with sexual innuendoes.


Fortune cookies were found to be the culprits behind a suspected fraud in the March 30, 2005 Powerball drawing held across 29 states.  While one person won the $13.8 million jackpot, an unprecedented 110 players won second place prizes of $100,000 or $500,000, depending on whether they chose an option to multiply their win.  Normally the lottery has 4-5 second place winners.  It turned out that all the winning numbers had been from fortune cookies manufactured at Wonton Food, Inc.  The fortunes read:  "All the preparation you've done will finally be paying off."

And finally, here's an actual fortune that I received after dining at Nop Gow, my favorite Thai restaurant: 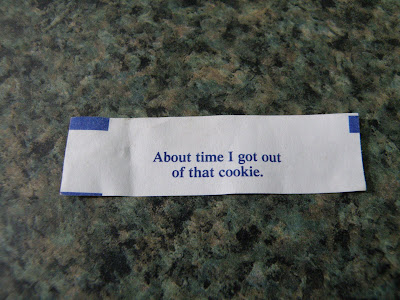