When my mother was a girl growing up in Athens, Greece, in the 1930s/early 1940s she and her friends were often warned to be very careful when they were out in public because they might get kidnapped and put in a harem.  The connotation of a harem is a place where women are kept captive and used as sex slaves, wasting away with boredom.  Even though women were secluded, they exercised their power through agents.  The traveler and historian Ibn Battuta remarked in 1336 that Turk and Tatar women enjoyed "a very high position".


Although harem women were slaves they were never married to the sultan, however their children were considered legitimate if recognized by the father.  The Ottoman rulers routinely chose women of foreign backgrounds in order to gain the fidelity of those external provinces.  These women, of course, converted to Islam. In Islam women were allowed to own property and to control it, so business dealings were something of a norm.  Mothers, aunts, and even sisters of sultans were often entrusted with diplomatic affairs.


The harem had a very elite social structure.  There was a rule that once a concubine gave birth to a son, she ceased having children.  This was to ensure that a prince would not have to share the political resources a mother provided with any brothers.  The Sultan Süleyman broke that rule with Hürrem, with whom he had four sons.  She also moved into the imperial residence.  She was accused of bewitching him, so astonishing were his actions, and she was very unpopular. After this, harem women were not allowed to be prominent, except for the mothers of princes.


These harem women held considerable power.  The Valide Sultan (literally "Mother Sultan" in Ottoman Turkish) was the title held by the mother of the reigning sultan.  This was a very important and powerful position, at times second in power to the Sultan, and the Valide Sultan had great influence on the affairs of state.  There was a time during the 16th and 17th centuries when there were a number of very powerful Valide Sultans who assumed new heights of power.  This period is know as the Sultanate of Women.


These particular Valide Sultans acted as regents to their sultan sons who were minors or mentally unfit to rule, and as such acted as guardians of their sons and political tutors.  This rash of young and/or incompetent sultans was the result of a change in the rules of succession.  Primogeniture was originally thought to be unfair to younger, and perhaps more capable, sons.  Princes were expected to fight for the right to rule, but this was eventually deemed too violent, so primogeniture was adopted again.

One of the concepts of Islam is the five pillars - profession of faith, prayer, ritual fasting, charity, and the pilgrimage to Mecca.  Charity means giving a fixed portion of one's wealth to help the poor and needy.  This a religious obligation, to share the bounty from God, and is distinct from voluntary giving.  Some of the Valide Sultans commissioned great works, ranging from wells to mosques, to fulfill this obligation.  Some of their edifices have become historically famous...


The aforementioned Hürrem was born in the early 1500s to a Ukrainian Orthodox priest (the Ukraine was then part of Poland).  She was captured in a raid by Crimean Tatars and taken as a slave.  She was eventually added to Süleyman's harem, where she became his favorite.  She was responsible for several major works of public buildings from Mecca to Jerusalem, including a mosque, two schools, a fountain, a women's hospital, a public soup kitchen, and a public bath.


Mihrimah was the daughter of Hürrem and Süleyman, and evidently "Daddy's girl", traveling with him all over the Ottoman empire.  She was unhappily married to the Sultan's Grand Vizier, but continued traveling with her father.  She functioned as the Valide Sultan for her brother, Selim II.  She is responsible for two mosque complexes in the Istanbul area.  The Mihrimah Mosque at the western wall of the old city, and the Iskele Mosque, a prominent landmark.  There is a romantic myth about these mosques.  It is said that the architect of these mosques fell in love with Mihrimah, and that on March 21st, her bithday and a time when day and night are equal, at sunset, with a clear view, you can see the sun set behind the only minaret of the Mihrimah Mosque, and the moon rise between the two minarets of the Iskele Mosque.


Nurbanu was either a Venetian of noble birth or a Spanish jew.  As the mother of Sultan Murad II, she acted as his de facto regent for nine years.  Her ethnicity is unknown, and the subject of much conjecture.  Under her patronage the Atik Valide Mosque and Külliye (a multi-purpose building complex surrounding the mosque), and a Turkish bath were built.  The Atik Valide complex includes a medical school, primary school, hospital, refection hall, guesthouse, carvansary, a Koran recitation school, a school specializing in the study of the Hadiths (sayings and deeds of the Prophet), and shops. 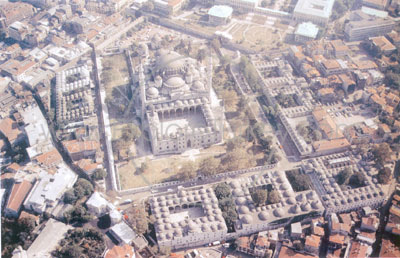 Safiye is thought to be of Venetian descent, born as Sophia Baffo and the daughter of the Venetian governor of Corfu.  She was captured by corsairs and presented to the Ottoman harem and was a cousin of Nurbanu.  She was one of the most influential Valide Sultans, veritably ruling as co-regent with her son. She is famous for starting the construction of the Yeni Camii or New Mosque in Istanbul.  The site she chose was in a commercial area of the city inhabited by non-Muslims.  Her intent was to spread Islam in the area, but getting the land was not easy.  When her son died, all construction stopped since she was no longer Valide Sultan.  It was completed later by the Valide Sultan Turhan.


Kösem was the consort of Ahmed I, and one of the most powerful women in Ottoman history.  She was of Greek ethnicity, the daughter of a priest from the island of Tinos.  She was captured and sold in Istanbul at the age of fifteen.  Her son Murad IV was a minor, so she ran the empire.  When her son Ibrahim I succeeded his brother, he was mentally unstable, so she continued in power. Ibrahim was deposed and her grandson Mehmed IV was the successor, and she declared herself regent again, by virtue of Mehmed's mother being too inexperienced to run things.  Although she did not create any edifices, she was renowned for her charity and for freeing her slaves after three years of service.


Turhan Hatice was also Ukrainian and captured by a Tatar raid.  She was sent to Topkapi Palace as a gift to the mother of Sultain Ibrahim, Kösem.  When her son became sultan, she was overlooked for the position of Valide Sultan because of her youth and lack of experience.  However, she was ambitious and fought for the title.  Although there is no proof Turhan was involved, Kösem was murdered three years after being regent for her grandson.  Turhan built two fortresses at the entrance to the Dardanelles, one on the European side and one on the Asian side. But her greatest accomplishment as a benefactress was to finish the Yeni Camii, or New Mosque that Safiye began.  This is hailed as the first imperial mosque built by a woman.  Turhan Hatice was the last woman to wield great power as a regent.


This was the age of strong and capable royal women - Mary Tudor, Elizabeth Tudor, Mary Queen of Scots, and Catherine de Médicis, to name a few Europeans. They were grudgingly admired and very powerful.  Kudos to these Ottoman women who literally made the most of their lots in life and contributed to the greater good.