Each year the CPNB or Collectieve Propaganda van het Nederlandse Boek (the Collective Promotion for the Dutch Book) organizes a book week to promote Dutch literature. The CPNB was founded by professional publishing and bookselling groups, the Nederlandse Boekverkoperbond and the Groep Algemene Uitgevers (Dutch Booksellers Federation and Trade Publishing Group) respectively. The entire country observes this week, and activities such as literary festivals, debates, and book signings are held all over. 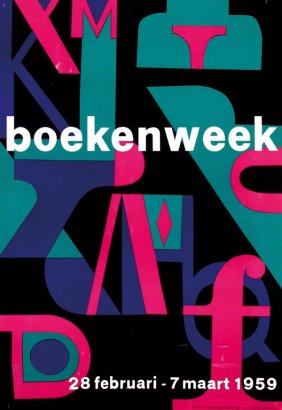 Boekenweek, or book week, is an annual event lasting ten days dedicated to Dutch literature.  The event always begins on a Wednesday and it is traditionally held in March.  Bookstores and libraries are able to order campaign materials, which include posters, window displays, and magazines. Orders are placed once and the appropriate number of materials are printed to keep costs down. 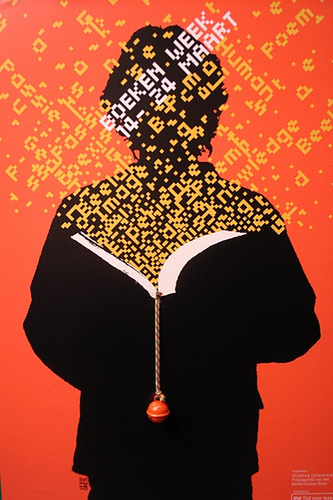 Its precursor was Dag van het Boek (Day of the Book) which was held on November 15, 1930, in the interest of protecting the integrity of books from the new media of radio and films.  No event was scheduled in 1931, but in 1932 the first Boekenweek was held.  Due to German occupation during WWII, Boekenweek was not held from 1942 to 1945. 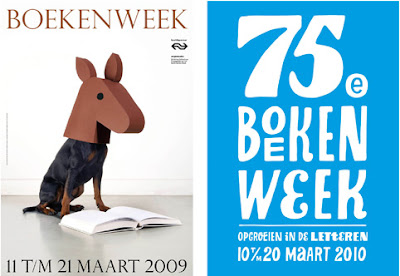 Boekenweek has a new theme each year.  The beginning is celebrated with the Boekenbal (book ball) that is attended by writers and publishers.  The Boekenbal has met with some controversy.  It is an invitational event whose guest list is decided by the CPNB.  In opposition to this a separate event has been held since 2002.  The Bal der Geweigerden (ball of the refused) admits anyone, and is held near the location of the Boekenbal.

The Boekenweekgeschenk (book week gift) is a wonderful tradition.  Each year a prominent author is asked to write a book, commonly a novella, to be given by bookstores upon the purchase of a set amount of books in the Dutch language. Since 2001 libraries also participate and give the Boekenweekgeschenk to new members.  In 2001 another first occurred, the Boekenweekgeschenk was written in English by Salman Rushdie and was later translated into Dutch. 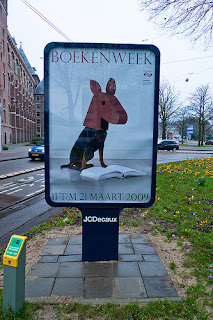 For several decades, the 1940s through the 1960s, the Boekenweekgeschenk was sometimes published anonymously.  As part of a contest, there was a list of possible authors inside the book, and readers could mail-in their guesses.  The curriculum vitae of the author, called the Boekenweek-cv, is available through public libraries to their members. 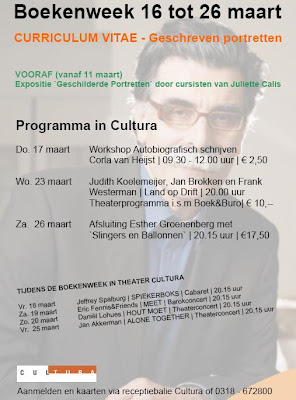 Since 2002 the Boekenweekgeschenk can function as a ticket to travel free by train on that Sunday throughout the Netherlands.  The Boekenweekgeschenk has grown so much in popularity that last year, which was the 75th anniversary of Boekenweek, there were 958,000 copies printed.  This year's Boekenweekgeschenk is The Crow by Kader Abdolah, the pseudonym of Hossein Sadjadi Ghaemmaghami Farahani. Curiously, it is also available as an e-book with the purchase of 12.5 euros worth of e-books.


In 2010, an additional promotional item was added.  The Boekenweek stamp was offered for 2 euros and 20 cents, and could be used to mail items up to just over 17.5 ounces.  Measuring just over 1 inch by 1.5 inches, it is in the form of a small book with a story inside.  The book can be detached from the envelope or package and read by the recipient.  The story was Wat is erger (What is worse) and was an appendix to the Boekenweekgeschenk of that year, which was Duel by Joost Zwagerman. 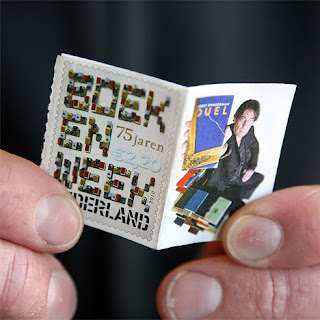 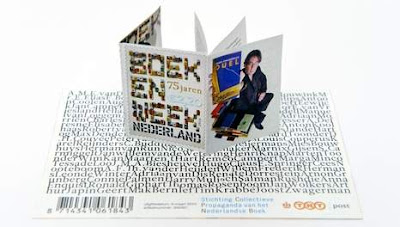 The current Boekenweek ends this Saturday.  This year's posters were part of a campaign designed by Van Wanter Etcetera, and the artwork was created by Souverein.  The concept this year is Geschreven Portretten (Written Portraits), which are autobiographies.  Original book pages were used for the text within the portraits.


For so many decades everyone in the book trade - publishers, book sellers, libraries, etc. - all get on the same page (pun intended) and promote books.  What an outstanding concept!  It would be nice to see the U.S. and other countries follow the Dutch lead.  However, the organizing, planning, and cooperation to pull this off would be phenomenal.  Kudos to the Dutch for managing it!