The people in the photo above are going to church.  Sort of.  They are, in fact, going to MY kind of church - a bookstore in an old Dominican church.  This world-famous bookstore is in Maastricht in the Netherlands.  It has made "best" and "most beautiful" bookstore lists worldwide, and likewise the pictures of it have been well-circulated.  But what is the story behind this old building?


In 1261 the Dominicans were given permission to found a monastery in Maastricht.  They built this church, one of the oldest Gothic churches in the Netherlands, which was consecrated in 1294.  It existed for five centuries until 1794, when the French conquered and annexed the city to the French Republic. This ended the monastery, and the site was used by the French as a parish until 1805.  Then most of the art was removed, and the French used it as a stable for their cavalry.  In the ensuing centuries the building served many purposes, including housing the town's guillotine, as a snake house, a boxing arena, and finally as a parking area for  bicycles.


Enter Selexyz, a large Dutch bookstore chain, who collaborated with the city council to open a new bookstore here.  Designed by Dutch architects Merkx & Girod, a self-standing, two-story structure in black steel was erected for the books, thus keeping the church intact.  This clever arrangement earned the firm the Lensvelt de Architect Interior Prize in 2007 for preserving the landmark.  The juxtaposition between the modern and the old is intriguing.  The book structure is assymetrical, leaving visitors to experience the full height of the church building.

In the vaults of the church were ancient and severely damaged frescoes, which have been restored.  They are considered exceptional quality for this area of Europe.  Most of these paintings have been dated to around 1619, and are considered the work of Jan Vassens (aka Joannes Vasoens), a 17th century Dominican monk.


The church also has a mural depicting St. Thomas Aquinas (1224-1274), dated to 1337.  It is the oldest image of the saint in Europe.  The mural was covered in white limestone, but in the 19th century Victor Stuers carefully removed the limestone.  Stuers was a Dutch lawyer, politician and civil servant, whose concerns were bent toward preserving Dutch heritage.  Since then the restoration has been painstaking.


The bookstore also hosts a variety of events, from a poetry reading with a cellist playing, to local performers.  Readings, signings, book launchings, lectures, musical recitals, the church is now alive with creativity.  The walls of the choir exhibit local artists' work.  There are about 120 events per year, which are advertised on their website.  The Coffeelovers cafe is where the high altar once stood, and features a six meter long table in the shape of a cross. 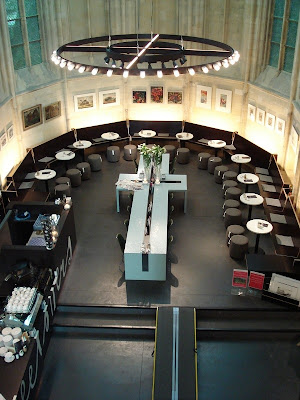 Selexyz Dominicans has an inventory of approximately 50,000 books, many of them in English.  More than 700,000 customers and tourists visit the store per year. A high number of these visitors are Japanese, which is not surprising since their culture seems to value both tradition and innovation.

Great architecture, great art, books, and coffee.  This must be paradise.