Repost from 2/4/11:
Who says women can’t keep a secret?
Long, long ago, in a country far, far away, women were not allowed to be literate.  So what, you say.  That could be anywhere in the world if it was long, long ago.  True, but the place I am talking about is China from the fourteenth or fifteenth century to the early twentieth century, roughly what is considered the feudal era of Chinese history.
In the Yongming river region of Jiangyong County (Hunan province) women developed a secret script that was passed down to younger women.  Much of what has been written about this script, called Nüshu, is that it was a secret language.  This is not true.  It was not a language, but a writing system used for the local language that both men and women spoke.  There were strict rules about never using it front of men or revealing its existence to them.
It was customary in some areas at the time of the development of Nüshu to bind the feet of young girls from the age of seven until they were married off at age seventeen.  Those ten years amounted to imprisonment, and the girls were now hobbled and illiterate.  Their mothers would find similar girls and form groups called “sworn sisters”.  They would be taught Nüshu, write diaries, and prepare books for each other called three-day wedding books.  These would be given to a bride three days after her  marriage when she had moved to another village, and she could read the messages of hope from her sworn sisters.
Besides diaries and three-day wedding books, typical writings included folk songs, tales, and monody.  Sometimes the characters were disguised as decorative marks or artwork.  Poems and lyrics were often handwoven into belts and straps, or embroidered onto clothing, fans, handkerchiefs and other everyday items.  Women had their Nüshu items burned at their gravesites as a necessity for secrecy and as a symbolic rite.
But actually the writing system wasn’t so secret.  Men knew about it but ignored it as being beneath them, and made fun of it.  Scholars are doing as much research as they can about it, but it is difficult as there are no accounts in historical records or local annals, no inscriptions, and it’s not in any genealogies.  The last woman who was proficient in it died in 2004 at the age of 98.  Yang Huangyi spent three years with seven sworn sisters, even though she was not one of them, to learn the language, and became the only surviving writer when the last sister died in the late 1990s.  She was totally illiterate in standard Chinese.  Because of this her writing in Nüshu was considered more definitive and original since it wasn’t affected by standard Chinese.
During the Japanese takeover of China in the 1940s Nüshu was surpressed in fear of it being used for espionage or sending encoded messages.  During China’s cultural revolution (1966 – 1976) the Red Guard collected and destroyed Nüshu artifacts.  Since women were now being educated there was no need for it and it started to fade away.  It wasn’t until 1983 that outside scholars became aware of it, and it has received keen attention from linguists and anthropologists alike.
Nüshu characters are light and wispy, a stark contrast to standard Chinese characters.  The script is read from top to bottom, or horizontally from right to left like traditional Chinese.  It is a phonetic script, whereas standard Chinese is logographic, each character representing a word or part of a word. 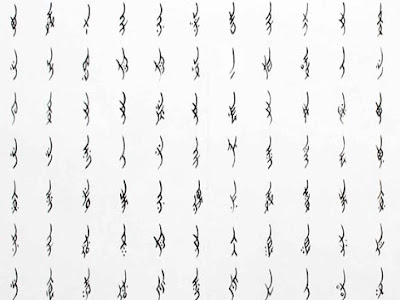 When Nüshu items were systematically destroyed, a subculture was destroyed as well, including the idea of sworn sisters.  But the current generation of women is still benefiting in a sense from Nüshu.  It has become a tourist attraction, and one which the government is avidly supporting.  Items are being made for the tourist trade, a museum constructed, and a school was founded in Puwei where the language is being taught.  Women are often making more money in this new industry than men can make from more traditional modes of employment. Unfortunately, the purity of the writing system is being degraded as some characters are being redesigned to be more artsy, and competency in Nüshu is not necessarily a prerequisite to be involved in the industry.
But time marches on, and Nüshu goes on, once serving women's needs, now providing financial renumeration and a glimpse of a particular rural history.  A case of the word being mightier than the sword.
***************
Author Lisa See's novel Snow Flower and the Secret Fan features Nüshu
and is the story of two young girls growing up in feudal China.
*******************************
Posted by Linda Hedrick at 12:01 AM